The Wellmont presents… The Wallflowers and Better Than Ezra 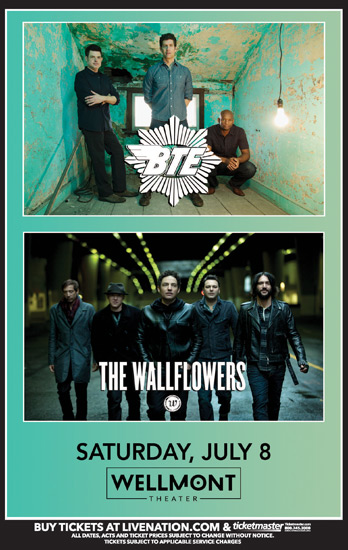 Before their omnipresent 1995 single “Good” hit No. 1, before their debut album Deluxe went double-platinum, before popular shows such as Desperate Housewives licensed their song “Juicy,” before Taylor Swift attested to their timeless appeal by covering their track “Breathless” — New Orleans’ Better Than Ezra was a pop-rock act paying its dues, traveling from town to town in a ramshackle van. Over two decades after the band formed, that vigilance still resonates strongly with the trio, who were finally rewarded after seven years of stubbornly chasing their dreams. “This band,” notes bassist Tom Drummond, “has never been handed anything.”

Better Than Ezra has always possessed an uncanny ability to deliver a sticky melody. It just took time for the world to figure this out. As testament to Griffin’s pop prowess, he’s now become an in-demand songwriter and producer across an array of genres (from Sugarland’s “Stuck Like Glue” to Howie Day’s “Collide”) in the five years since the band’s last album, Paper Empire. While penning tracks for other artists, Griffin found himself squirreling away compositions he felt best belonged to the Better Than Ezra canon. He coaxed the band back together (which includes drummer Michael Jerome) to record in L.A. for six weeks with Beck and Phoenix producer Tony Hoffer. As testament to their inner-band harmony, ex-drummer Travis McNabb, still tight with the band, filled in on percussion in the studio while Jerome was on tour.