The following is from the Paper Mill Playhouse 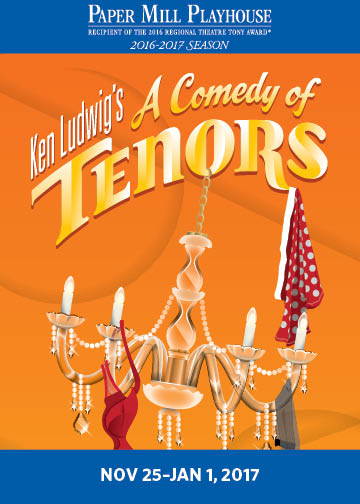 Paper Mill Playhouse is pleased to announce casting of the comedy by Ken Ludwig, A Comedy of Tenors, the hilarious sequel to the Tony® Award-winning comedy Lend Me a Tenor.

Groups of 10 or more can receive up to a 40% discount on tickets and should call 973.315.1680. Students may order $20 rush tickets over the phone or in person at the Paper Mill Playhouse box office on the day of the performance. Paper Mill Playhouse’s 2016-2017 season is proudly sponsored by Investors Bank.

The sequel to the grand-slam Tony® Award-winning comedy Lend Me a Tenor! One hotel suite, four tenors, two wives, three girlfriends, and a soccer stadium filled with screaming fans. What could possibly go wrong? It’s 1930s Paris and the stage is set for the concert of the century—as long as producer Henry Saunders can keep the amorous Italian superstar and his hot-blooded wife from causing runaway chaos. An uproarious ride, full of mistaken identities, bedroom hijinks, and madcap delight.

There are also a variety of Free Audience Enrichment Activities for A Comedy of Tenors:

Conversation Club: Join Paper Mill Playhouse Thursday evenings, February 2, 9, 16, or 23 one hour before curtain for an informal, informative gathering. Learn more about the performance and perhaps catch a glimpse of the stage being set.

The Director’s Viewpoint: One hour before curtain on Wednesday, February 1, Paper Mill Playhouse hosts a pre-show discussion in the Renee Foosaner Art Gallery.

Q&A with the Cast: After the matinee on Saturday, February 25, stick around for a lively Q&A with cast members directly following the performance.

PAPER MILL PLAYHOUSE, a not-for-profit arts organization under the direction of Mark S. Hoebee (Producing Artistic Director) and Todd Schmidt (Managing Director) and recipient of the 2016 Regional Theatre Tony Award, is one of the country’s leading regional theaters.  Paper Mill Playhouse programs are made possible, in part, by funds from the New Jersey State Council on the Arts. Paper Mill Playhouse is a member of the National Alliance for Musical Theatre, the Council of Stock Theatres, and the New Jersey Theatre Alliance.