interACT Brings ‘On the Air’ to Burgdorff 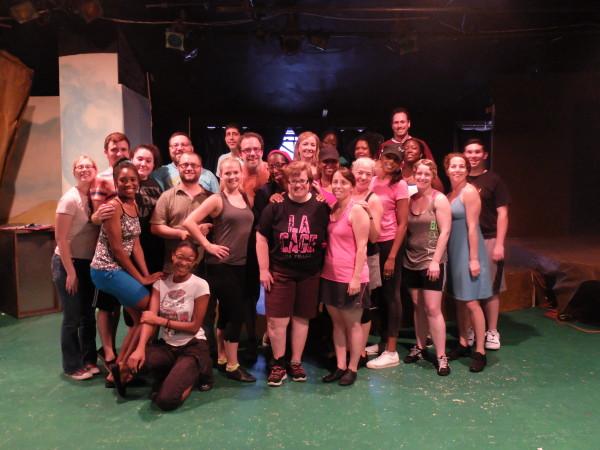 Part of the cast of interACT’s benefit performance of “On the Air.”

Some of the most memorable jukebox hits that scored on Broadway will be performed by the Essex County theatre company interACT Theatre Productions at the Burgdorff Center for the Performing Arts in Maplewood.

Among the locals featured in the production is Seth Boyden School Principal Mark Quiles. interACT Sings! On the Air is a two-night celebration Friday and Saturday, Aug. 1 and Aug. 2 to raise money for the troupe’s upcoming season. The benefit will include a raffle and auction, as well as a reception for supporters of community theatre on each of the two evenings. Not to be outshone by Quiles, Danielle Ferland, who originated the role of “Into the Woods'” Little Red on Broadway, will host the evening performances. interACT has been praised for talented casts and creative staging of last season’s productions of “Into the Woods,” “Carrie: The Musical,” “The Importance of Being Earnest” and “Father of the Bride.” The company also presented the children’s classic, Winnie the Pooh, to sold out audiences.The 2014-2015 season will kick off with a staged reading of six faithful adaptations of the haunting works by Edgar Allan Poe. Performance dates are 7:30 p.m. Friday and Saturday Aug. 22 and Aug. 23; and 4 p.m. Sunday, Aug. 24.The season will also feature Night of the Living Dead in October, School House Rock Jr. (kids show) in January, Almost Maine in March, and 9 to 5 in May. “Our mission is to be a more inclusive and accessible form of community theatre,” said Elena Svitavsky president, interACT Theatre Productions. “We want to engage as broad an array of community members as possible, whether on stage, backstage, off stage or in the audience – the magic of theatre should be available to everyone!”  Reflecting the company’s mission of encouraging and incorporating diverse casts, Nicholas J. Clarey, the company’s artistic director, has assembled 26 talented performers for the benefit musical iSing. The cast includes some well-known talents in the SOMA community, including Seth Boyden Principal Mark Quiles. Also performing are: Ann Alfano, Nadiya Braham, Austin Brecht, Laura Kuperman Brenden, Levil Shawn DaCosta, Anique Evans, Danisha Matta Field, Alicia Fink, Erik Gaden, Kimster Claus, Joshua Gonzalez, Diane L. McClintock, Eva Neimeijer, Doreen Oliver, Regine Riviere, Shona Roebuck, Sabrina Santoro, Leigh Huff Shultz, Kayla Boombarbie Stewart, Elena Stremlin, Stacy Thomas, Pat Tiné, Tasha R. Williams, Arroyo, David Wren-Hardin, and Debbie McKeever Zika.  Hors d’oeuvres, desserts and flowers for the benefit are being generously donated by Maplewood Deli and Grille, Edo’s Cakes, and Lotus Petals. There will also be a raffle and a silent auction of goods and services donated by local merchants.  Tickets include food and drinks and are $35 for floor seating and $25 for balcony.  Tickets will be available for purchase at the door, or online at interactproductions.tix.com The reception both evenings begins at 7 p.m. with performances starting at 8 p.m. The Burgdorff Center for the Performing Arts in Maplewood is located at 10 Durand Road, Maplewood. More information is available at the interACT website, https://www.interactproductions.org/