Meet Eleanor Roosevelt at the Woodland on Sunday, March 20

From Durand-Hedden House and Garden: 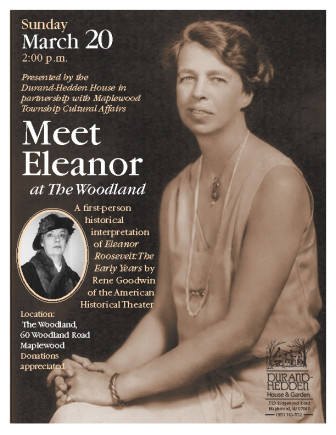 In the public sphere, Eleanor Roosevelt exuded a zest for life and carved out a career and reputation as First Lady by championing the equality of people of all nations. Through her efforts the world began to look anew at human rights and equality. She soon became known not just as First Lady of the United States, but rather, as First Lady of the World and is considered the prime architect of the United Nation’s Declaration of Human Rights. Though she fought on the world’s stage to improve the lives of others, she struggled in the shadow of her famous husband, and in her privates roles as wife, mother, and daughter, she suffered much personal pain and disappointment.

This first-person historical interpretation, entitled Eleanor Roosevelt: The Early Years, is presented by Rene Goodwin of the American Historical Theater. It allows attendees to meet the remarkable Eleanor Roosevelt prior to World War II in her initial years as First Lady and to share her passions as well as her pains while looking back in time at America and the world. (Little-known fact: This is Mrs. Roosevelt’s “second” visit to Maplewood. In the late 1920’s, previous to her husband’s presidency, she presented her support for the League of Nations in a talk before the Woman’s Club of Maplewood.)

Philadelphia based actress and vocalist Rene Goodwin studied at the London Academy of Music and Dramatic Arts, has performed in a stand-up duo, and serves as a musical mentor for the Philly Pops. She joined the well-known American Historical Theater in the 1980’s where she developed a trilogy of presentations on Eleanor Roosevelt’s life and has gone on to portray other historical figures such as Dorothy Parker and Golda Meir. Goodwin has appeared at numerous venues such as the White House Visitor Center, the Theodore Roosevelt Museum, the National Archives, and the Freedoms Foundation of Valley Forge.

The performance is free (donations appreciated) and is presented in honor of Women’s History Month in partnership with Maplewood Township Cultural Affairs. Doors open at 1:30pm at The Woodland, 60 Woodland Road, Maplewood, NJ.

Country Shopping
Stop by Durand-Hedden’s Country Store on Ridgewood Road before or after the performance. Find early American games, books, and toys; facsimile documents; quill pens and ink; historic cookbooks; cookie molds; tin lanterns; and reproductive decorative items and ceramics. You’ll also discover the hard-to-find original Doors of Maplewood poster, Smile: A Pictorial History of Olympic Park 1887-1965, and the new acid-free reproduction of the charming 1931 Map of Maplewood. Open from 12 to 5 every Saturday and Sunday.

About Durand-Hedden House and Garden
Durand-Hedden House is dedicated to telling the history of the development of Maplewood and the surrounding area in new and engaging ways. It is located in Grasmere Park at 523 Ridgewood Road in Maplewood. For more information or to arrange group tours call 973-763-7712. You can also visit our website at durandhedden.org and find us on Facebook and Twitter.