With most of New Jersey’s stages shuttered for the time being, the South Orange Performing Arts Center is taking performances directly to arts audiences through the magic of livestream. Starting October 8 at 7:30 p.m. Thursdays won’t be “must-watch” TV night, it will be “can’t miss what’s happening at SOPAC night!” These events, often featuring South Orange and Maplewood performing artists, will bring the excitement of a night out at SOPAC to the comfort of your living room. SOPAC Sessions are free for SOPAC members and just $10 per ticket link for non-members.

Broadway’s leading lady Christiane Noll kicks off the series on October 8 with a 60-minute Broadway musical journey through roles she’s done and roles she’d like to do, in the hopes of answering her ongoing pandemic question, “Am I Losing My Mind?” She will be exploring songs, from Follies, Bridges Over Madison County, Company, Fun Home, Grey Gardens, Triumph of Love, A Little Night Music, Dear Evan Hansen, Jagged Little Pill, Falsettos, Next to Normal, Ragtime, Sunday in the Park with George and Jekyll & Hyde. Music Director William Waldrop accompanies her on the piano with Celeste Cumming on cello and Billy Bivona on guitar and French horn.

Ms. Noll has called Maplewood, New Jersey home for the past 14 years. An accomplished and celebrated leading lady, she received Tony Award and Drama Desk Award nominations and won a Helen Hayes Award for her portrayal of Mother in the Kennedy Center Revival of Ragtime on Broadway. She starred in the record-breaking First National Tour of Dear Evan Hansen (BWWLA award) and took over the role of Cynthia Murphy in the Broadway Company. She made her Broadway debut creating the role of Emma in Jekyll & Hyde, receiving a FANY award for Best actress in a musical. Ms. Noll received her second Drama Desk nomination for her work in Chaplin on Broadway. She has been Sister Margaretta in NBC’s The Sound of Music Live with Carrie Underwood and she supplied the singing-voice of Anna in the Warner Brothers animated feature The King and me.

Along with many other Broadway credits Ms. Noll has recorded many cast albums and compilation recordings. She has released five solo CD’s, Christiane Noll – A Broadway Love Story, The Ira Gershwin Album, Live at the Westbank Café, My Personal Property and Gifts – Live at 54 Below. 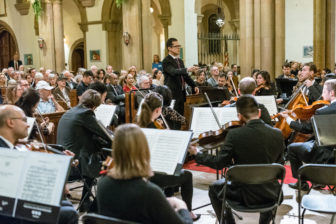 The Montclair Orchestra is unlike any orchestra you’ve experienced before, with extraordinary music students awarded fellowships to train alongside professional mentors form world-renowned orchestras. Under the baton of Music Director David Chan, this unprecedented learning environment provides an electric and unforgettable experience for musicians and audiences alike.

The program will consist of:

Gershwin/Milone: It Ain’t Necessarily So

Don’t miss Broadway’s Christiane Noll on October 8 at 7:30 p.m. and the Montclair Orchestra with David Chan and Terrence Wilson on October 22 at 7:30 p.m. Tickets are free for SOPAC members and $10 per ticket link for non-member. Click here for Christiane Noll tickets and here for Montclair Orchestra tickets or call the box office at (973) 313-2787.

Since 2006, SOPAC has been serving as a premier performing arts center in the region. SOPAC offers innovative artistic and cultural experiences for diverse audiences in an intimate, inviting environment. The arts center hosts a variety of live performances, community events and education programs for all ages. SOPAC is home for Seton Hall University Arts Council’s performances, including Classical Concert Series, Jazz ‘N the Hall performances and Seton Hall University Theatre productions. SOPAC programs are made possible in part by the National Endowment for the Arts and the New Jersey State Council on the Arts. The South Orange Performing Arts Center (SOPAC) is a 501(c)(3) charitable organization. For more information, visit SOPACnow.org.

SOPAC is grateful for the generous support of BCB Bank, our season sponsor.