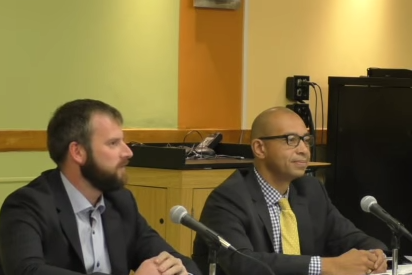 Mike Summersgill and Frank McGehee at the Maplewood Library, October 6, 2016

Democrat Frank McGehee and Republican Mike Summersgill traded comments at the second Maplewood Township Committee candidates forum of the season at the Maplewood Library on October 6.

The forum was hosted by the League of Women Voters of Maplewood-South Orange.

The first question was on development and redevelopment: “What is the appropriate balance between keeping small town feeling and growing into a 20th century community?”

Watch the video, recorded by Joy Yagid of SOMAtv, below.

See video of Summersgill and McGehee’s first meeting at the Hilton Neighbhorhood Association candidates forum on September 22 here. Read the News-Record’s coverage of that forum here.

The two candidates will meet once again at a forum hosted by Maplewood Senior Share at Les Saisons on Saturday, October 15.

The election will be held on November 8.