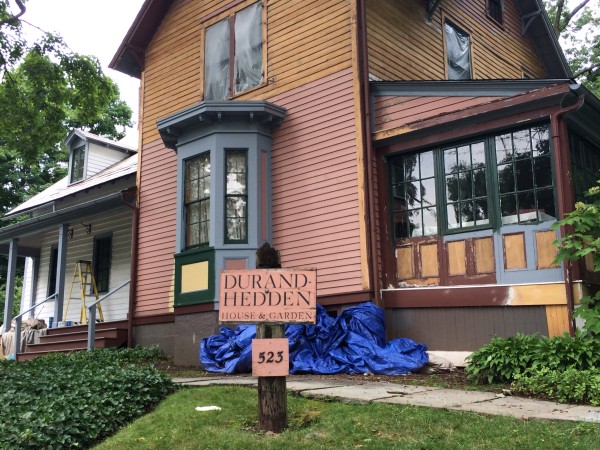 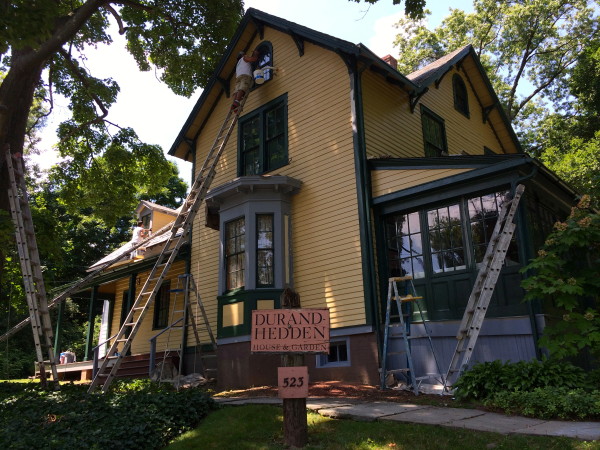 This story was updated on July 25, 2014 with additional photos showing the progression of the repainting.

Historic Durand-Hedden House — one of the oldest buildings in Maplewood as well as the town’s history museum — is getting repainted and will soon sport “new,” albeit historic colors.

Preparation began with carpentry repairs in early June, and painting should be completed by the end of July. Local painter Hugh Strong has been doing the job with his team. 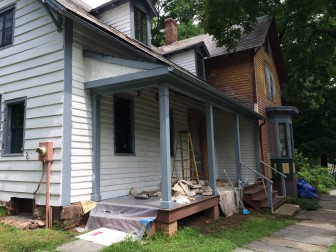 The work includes a certain amount of careful, historically monitored paint removal, but also the preservation of old layers in certain places so as to maintain an historic “document” of the building’s many past colors.

The original building dates back to about 1790, said Susan Newberry, president of the Durand-Hedden Board of Trustees (Newberry is also an Historic Preservation Commissioner in Maplewood). The Victorian addition was built around 1860.

The building, which has been a salmon color for the past 20 years (a color it sported back in early Victorian days), will now migrate to a straw/gold color with green trim and dark green sash. 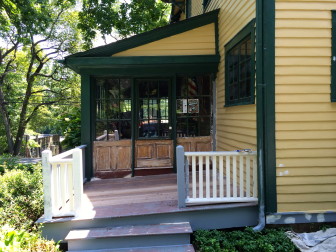 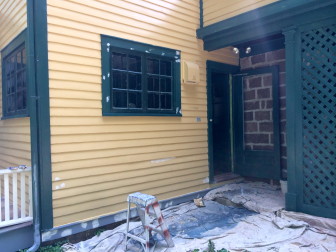 Newberry said that all the colors are historic hues that have previously graced the building. In fact, Janet Foster, an historic preservation consultant and adjunct professor in Historic Preservation at Columbia University who performed the paint analysis for Durand-Hedden back in 1991, has been a paint advisor on the project.

Newberry said that paint analyses have shown that the earliest part of the building was originally stained a brownish red and later white as was the fashion in the Federal and Greek Revival periods. The inaugural color at the time the new wing was added was salmon (termed reddish brown by Foster), followed by the straw.

But there were many more layers.

Newberry says that the hardest to remove has been an early “rubbery” latex that was probably applied in the 1920s.

The building was last painted about 10 years ago, but that was more of a touch-up of the salmon color.

The new paint will have a high gloss finish — an historically accurate look that harkens back to the oil paints that were used when the building was first painted straw and green in Victorian times.

Of the returning straw/green color combination, Foster wrote in her paint analysis: “This color scheme corresponds with prevailing taste in the latter nineteenth century, and marks a transition between the earlier Victorian color scheme of high contrast and the monochromatic effects popular in the twentieth century. The … tones were consistent with the ‘back-to-nature’ philosophy expressed in Queen Anne/Shingle Style architecture and in the interior designs influenced by William Morris.”

Interestingly, Foster noted that somber hues of the late Victorian era had a practical explanation as well: “The Industrial Age, during which time the amount of soot and dirt in the air from coal smoke literally forced urban Americans to paint in colors other than white or pastels. The light shades would be darkened and discolored in almost no time by the polluted air.”

Foster recommended that this color combination “would also enhance the Durand-Hedden House’s Victorian-era architecture, and would blend it into the surrounding garden and foliage.” 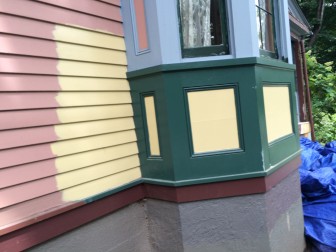 The new straw/green paint scheme will replace the salmon. July 16, 2014.

The cost of the preparation and painting has been assisted by a $15,000 grant from the New Jersey Historic Trust.

Newberry said that the next big capital project to tackle will be replacing the roof. She said that that project will entail the guidance and approval of the Maplewood Historic Preservation Commission since the house is a designated local landmark. Newberry noted that the current slate roof is more than 100 years old and under it lies an even earlier wooden roof.

On July 16, one could see that the building had been stripped and partially primed. The hard work of research, funding, preparation and preservation had been mostly completed.