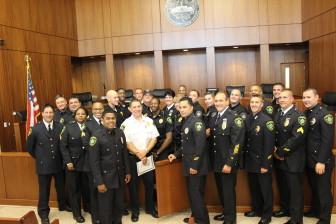 On a recent evening in May, Maplewood Police gathered at the Maplewood Municipal Court and Police building to recognize outstanding police work.

Chief Robert Cimino said that the awards ceremony — in which valor awards, distinguished service awards, command citations and unit citations are distributed — is held periodically in order to recognize the outstanding work of officers.

The award ceremony highlighted “various acts of bravery and professionalism that have been performed by our officers over the last few months,” said Cimino. “These awards include the building collapse incident, but there are also additional awards for disarming a suicidal suspect armed with a knife, the apprehension of an armed homicide suspect, and other exceptional police work.”

Details on each award are listed here. Scroll down for a photo gallery (click on an image to start the slideshow).