The following is from a Columbia Cross Country parent: 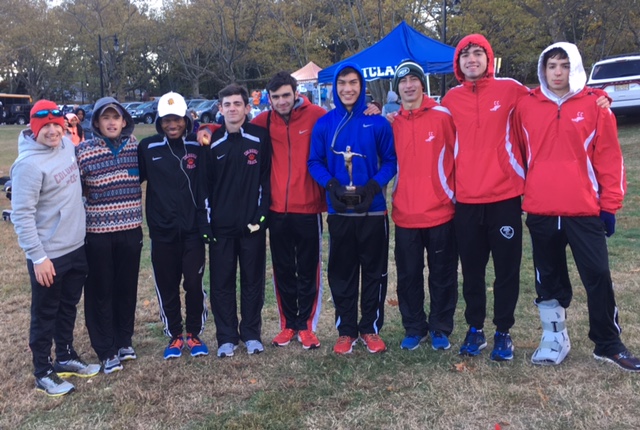 On Friday, October 28 the Columbia boys varsity cross country team won the Essex County championship at cold and blustery Brookdale Park in Bloomfield. The Cougars finished first among 21 teams and defeated second place Seton Hall Prep by a score of 53-67 based on the first five runners scoring for each team according to the place they finished. The score between the two teams was tied after the first four runners for each team had finished. When Columbia’s Avery Coreschi finished 18th, 14 places in front of Seton Hall Prep’s fifth runner, the county championship was sealed.

The team’s average time for the 5K (3.1 mile) course was 16:14, 13 seconds in front of Seton Hall Prep. Competing in a field of 149 runners the Cougars placed all five scoring runners in the Top 20 with medal-winning performances: Senior Jared Pangallozzi finished 3rd in 15:36 with a per mile pace of 5:01. He was followed by four juniors to close out the scoring for Columbia: David Ives 6th, Tim Depue 11th, Jonathan Salinardo 15th, and Avery Coreschi 18th. The time span between the first and fifth runners, known as the compression, was a tight one at 1:03 in light of captain Jared Pangallozzi’s fast finish as Columbia’s first runner.

The next cross country meet for the boys varsity team will be Saturday, November 5th when they compete in the New Jersey Group IV, Section II Championships at Greystone Park in Morris Plains.