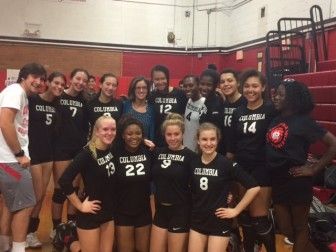 CHS Principal Elizabeth Aaron poses with the CHS Volleyball team after its 2-0 victory over Millburn on Oct. 23. The team ended the season with a 17-5 record and a 15-1 conference record. Photo Credit: Rose Salinardo

The Columbia Cougars varsity volleyball team ended its regular season last week with a win against the Millburn Millers in two tight and evenly matched games, 25-22, 25-23, putting the team at the top of its division of the Super Essex Colonial League Conference.

The packed CHS gymnasium helped to fuel the Lady Cougars determination to win having, previously lost to Millburn earlier in the season. This was the Cougars fourth consecutive win in as many days – defeating St. Vincent Academy, North 13th Street Tech, Immaculate and Millburn.

The Lady Cougars end their regular season with an impressive 17-5 record overall, and 15-1 for the Super Essex Colonial League Conference. Columbia currently leads the division, with Millburn close behind with one last game to play. The Cougars will either be the lone division champs or will share the title with Millburn.