The following is from a fencing parent: 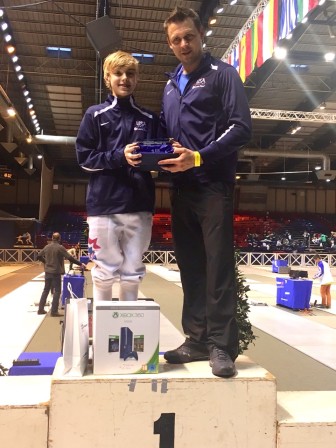 History was made in Paris when Maplewood’s Jack Woods won Gold and was the first fencer to win the prestigious Challenge CEP Marathon Fleuret for two years in a row, according to the organizers of the world’s largest Youth Men’s (Y15) Foil Event. 365 elite fencers from 27 countries competed in this high level international tournament with non-stop fencing over two days, which is why it is called a marathon.

On the second day during one of his more grueling bouts against Moritz Renner of Germany, Woods exhausted from the constant fencing had a close call winning the bout with the execution of a picture perfect “Flesh,” with only one second left on the clock, and gasps from hundreds of onlookers.

Reminiscent of his final bout last year Woods once again commanded the finals’ strip against French powerhouse Armand Spichiger from the start. He displayed a renewed energy and the fierce determination that he is well known for to win the final bout in under one period 10-3.

Coach Serge Vashkevich says, “When he won last year it was one of the greatest moments for me, as his fencing was incredible. This year was incredibly difficult as well, as such a high level of skills and stamina is required in this particular tournament to sustain this high level of fencing over two days. Each competitor from each country fences differently and is the best from his country. Jack has an incredible ability to adapt to the different styles. Also just when you think that Jack has no more strength left in a bout and he is down with seconds to go, he makes a dramatic comeback demonstrating his strongest skills to win.”

In the previous week Jack had competed in one of the most prestigious European Cadet Circuit Events in Brataslava for the first time. The top Cadet (17years and under) team members from countries from all over the world including Japan and Australia were competing. Although Woods is young to be competing in this event for the US, he brought enormous attention to himself when in one bout he went from being seeded after the pools at 133 to defeating the strong German Cadet seeded at number 5 and taking his position in the competition. He went on to defeat a number of top cadets and then missed out on getting into the top 8 by one point on priority, when he was defeated by the number one Cadet from Japan.

Twelve-year old Zander Rhodes from South Orange also received an award from the podium at the Challenge CEP Marathon Fleuret in Paris for the girls’ foil under 15 years. She was the youngest fencer to be seeded with 186 competitors. Zander who is no stranger to winning medals on the United States National Circuit, competed for the first time in Paris and missed out on being in the top eight by only one point, placing her ninth. Rhodes is also trained by Coach Serge Vashkevich at the Lilov Fencing Academy in Cedar Grove and has been training with Jack Woods for the event.

Coach Vashkevich says, “Zander is only twelve and is young to be competing in this high level international event. Her fencing was outstanding over this weekend. She has a great future on the international stage after her success in Paris.”