VIDEO: From Haiti to Seth Boyden School, A Morning Of Music

This morning of music from Haiti had very special resonance for the Seth Boyden community, which includes many Haitian-American students and families. The performance afforded everyone who attended the assembly a glimpse into Haitian culture. 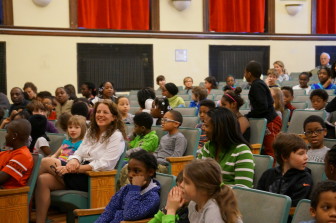 Beaubrun is the son of two of Haiti’s most famous musicians, Theodore “Lolo” Beaubrun and Mimerose “Manze” Beaubrun, the founders of the Grammy-nominated band Boukman Eksperyans; he is also the grandson of Theodore “Languichatte” Beaubrun, a famous Haitian comedian and entertainer. Now leading his own band called Zing Experience and touring across the Caribbean, North America and Europe, Paul Beaubrun is one of Haiti’s most respected young artists, carving a path that blends Haitian tradition, reggae and rock with lyrics in both the Haitian Creole language and in English.

A native of Long Island, New York, Morgan Zwerlein also has a lineage of Haitian roots music. He was the student of the late Frisner Augustin, a master drummer who was also the first Haitian to be awarded the prestigious National Heritage Fellowship by the National Endowment for the Arts, the United States’ highest honor for artists representing traditional and folk styles. Along with his own work as a teacher and performer, Zwerlein is a member of La Troupe Makandal, a group founded by Mr. Augustin, that presents and preserves Afro-Haitian music and dance in performances across North America.

Accompanying himself on acoustic guitar along with the African-rooted sounds of Zwerlein’s conga drums, Beaubrun performed several original songs. The musicians got the audience dancing, singing and jumping.

Click on the photos below to view larger images.