The following article was submitted by fencing team parents. 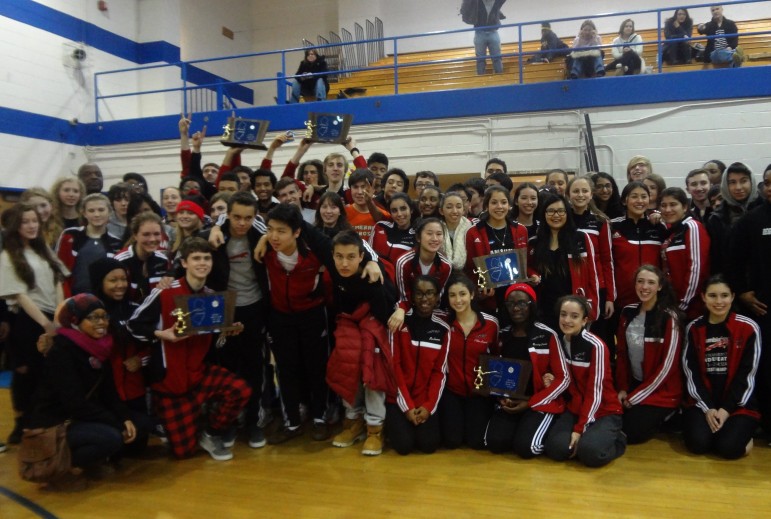 Sunday, February 1—to many, Super Bowl Sunday. To the Columbia boys’ and girls’ varsity fencing teams, a 9:00 a.m. start to the District 5 tournament in Monclair, New Jersey. Its outcome, along with the Cetrulo and Santelli results, would determine the seeding for the state team championships. Anyone who’s been to NJFA, Columbia’s excellent fencing venue, can attest to the home-field advantage, a coveted goal for the boys and girls, both looking to retain their titles.

Coach Darryl White stated that although it was a new district created to accommodate increased interest in the sport, the main rivals remained familiar. The Columbia boys had beaten Montclair and St. Peter’s Prep in the dual meets, and having Andrew Doddo on A-strip saber provided an additional edge. “But we take nothing for granted, we have to win the bouts,” said White.

The boys also placed seven teammates in the individual fence-off, which sends the top four finishers in each weapon to the state individual championship tournament on February 28. In epee, Bryn Hammarberg took first and Sam Gomberg took second. Ironically, Hammarberg’s only loss was to Gomberg in the first bout. In foil, Tran Soles-Torres took third behind the talented St Peter’s duo of Hunter Williams-Burrows and Felipe Rosario. In saber Andrew Doddo withdrew, as the state championship will conflict with Division I National Championships the same weekend in Reno, Nevada. Meanwhile, Gordon Rutledge finished sixth in saber, while Kiichi Sakai and Jack Goldberg finished eighth and ninth in foil.

The girls’ team had much to celebrate as well. The foil squad, made up of Samantha and Marissa Viqueira and Camille Pham, had a nearly flawless performance, capturing the gold. The epee squad, consisting of Nina Kambili, Abigail Merelman, and Brigid Lynch, won silver, behind the Academy of the Holy Angels. And the saber squad of Blessing Olaode, Celia Accardi, and Natalie Martinez earned the bronze medal, behind first-place Montclair and second-place Bergen Tech. With the squads’ 1-2-3 win, the Columbia girls notched the inaugural title of District 5 girls champion and secured the top seed for the state tournament.

The girls’ individual medal haul was even more impressive than that of the boys, with six of the nine starters making the cut for the state individual championships—and this even with foil phenom Sam Viqueira withdrawing because of the same event conflict as Doddo. Her sister Marissa took the gold and squad mate Pham took the bronze. In saber, Olaode took silver, while Accardi scored the bronze. In epee, Kambili won silver, Lynch, the bronze.