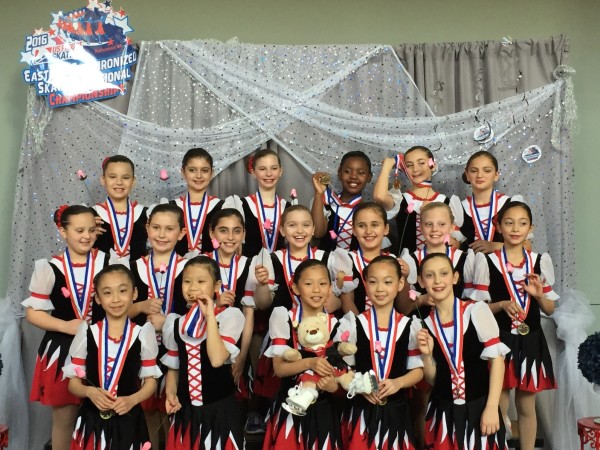 South Orange resident Madelyn Cicenia, a 4th grader at Jefferson School, and her teammates on the preliminary Synchroettes Synchronized Skating team won a gold medal in their division last week at the 2016 Eastern Sectional Synchronized Skating Championships in Richmond, VA.

The Synchroettes represent the Essex Skating Club of New Jersey and practice out of Codey Arena in West Orange.

Thirty teams and close to 600 skaters competed in qualifying rounds with 12 teams proceeding to the championship competition. Coached by Lori Zimmerman, the Synchroettes Preliminary Team included 18 skaters ranging in age from 8-to-9 years old and residing predominantly in communities across northern NJ, Staten Island, NY and New York. Cicenia is the only resident from Maplewood or South Orange on the preliminary division team.

The Synchroettes Synchronized Skating organization was founded by Head Coach and Director of Skating Geri Lynch Tomich in 2001. The 501C not for profit organization now includes 190 skaters participating on 10 teams.

Seven Synchroettes teams competed in the competition and joining the preliminary team on the podium was the Synchroettes Junior team winning the silver medal in the Junior division.