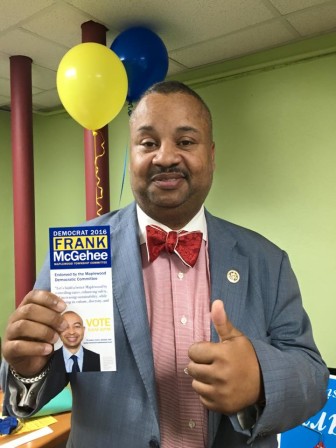 Congressman Payne attended a fundraising event at the Wine Barrel on Springfield Avenue, posing with McGehee and greeting constituents. Payne represents the 10th Congressional District of New Jersey, which includes parts of Union, Essex and Hudson counties, including the municipalities of Newark, Orange, Maplewood, South Orange and more.

McGehee, a Democrat, is running for the seat vacated by Marlon K. Brownlee, who recently moved from Maplewood. Mike Summersgill is the Republican candidate for the seat. Former Vice Mayor Ian Grodman was selected to fill the seat in the interim. Election day is November 8, with swearing-in to take place January 1, 2017.

McGehee and Summersgill have exchanged view at two candidates forums this season (view the videos here and here). They will meet again at a forum at Les Saisons Bed & Breakfast on October 15.