Seton Hall U. Donates $10K to ‘Give Back’ to South Orange Rescue Squad

On Tuesday, February 16, Seton Hall gave back to the volunteers of the South Orange Rescue Squad with a donation of $10,263. The check was presented to Rescue Squad Captain Dan Cohen by Tracy Gottlieb, vice president of student services, and Patrick Linfante, assistant vice president for public safety and security. 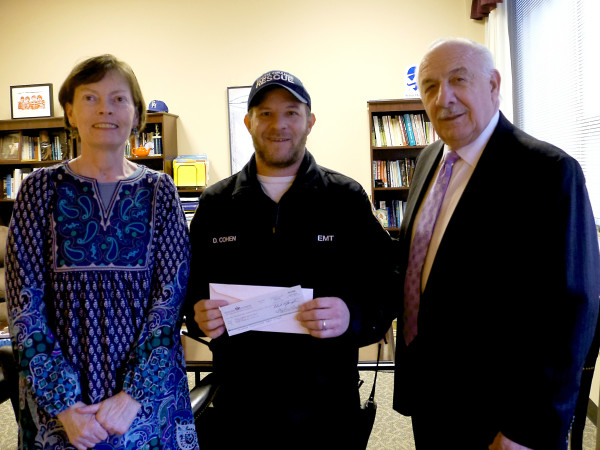 “I’m here to say thank you,” said Gottlieb. “Every year, we rely heavily on the rescue squad, and we’re very grateful. The partnership between the rescue squad and the police and fire departments of South Orange and Public Safety is invaluable to us. We very much want to continue to work with the rescue squad moving forward.”

Cohen echoed the appreciation for the partnership between the University and outside emergency services. “Sharing South Orange with Seton Hall University is a huge advantage for us. Volunteer Emergency Medical Services is fading in some towns, but being near Seton Hall helps us not to fade away and provides a constant stream of new member volunteers.”

Linfante also expressed his appreciation for South Orange’s emergency services. “We have a great working relationship with the rescue squad, police and fire department. They are here constantly — between fire drills and patrols — and we very much appreciate that presence.”

Student volunteers are vital to the everyday operations of the rescue squad, noted Cohen. The squad is entirely volunteer, with about 40 current members, including seven Seton Hall students and several alumni.

“Volunteering on the South Orange Rescue Squad provides students with a great sense of giving back. It allows them to give back to Seton Hall and to the South Orange community,” said Cohen.