Someone’s been tearing up the tennis courts in Maplewood’s Memorial Park of late, but it’s not with serves and volleys.

The Township is repaving, resurfacing, reposting and repainting the courts.

“We have already removed the courts and will be installing new asphalt and net posts,” Mayor Vic DeLuca explained in an email. “We also will be putting in some new fencing and landscaping. The work should be done by next week but we have to see what the temperature is before we can do the color coating, which takes about five days and requires temperatures above 50 degrees. If not now, we will finish the color coating in the spring.” 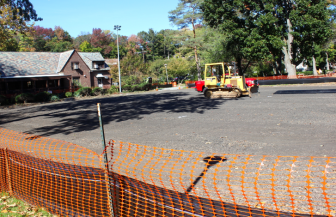 The cost of the project is $180,000, with $150,000 covered by the Maplewood Open Space Trust Fund and the balance from the town’s capital budget.

“The Memorial Park tennis courts are in constant use with classes and recreational play,” explained DeLuca. “They needed an upgrade to fix cracks and depressions. We will now have first class courts at this location, primarily paid for by the Open Space Fund which is dedicated tax revenue for our parks and playgrounds.”