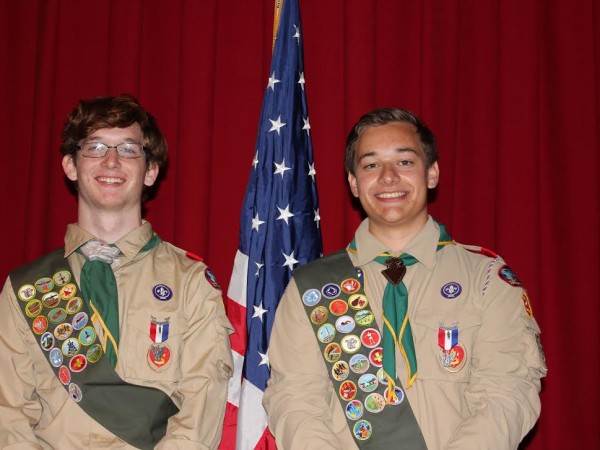 Jack Crane and Tom Meunch of Boy Scout Troop 21 out of St. Joseph’s Church in Maplewood received their Eagle Scout awards on June 5 at Prospect Church.

Criteria for receiving Eagle Scout status are rigorous, including earning 21 merit badges; serving six months in a troop leadership position; planning, developing, and giving leadership to a service project; and successfully completing an Eagle Scout board of review.

Meunch’s service project was the creation of signage for the DeHart Park exercise area. Crane ran a community food drive for the Rent Party Backpack Pals program. Both projects included the entire troop and many hours of service.

Meunch graduated from Seton Hall Prep in 2014 and recently completed his freshman year at University of Miami in Florida. Crane is graduating from Columbia High School this June and will attend Richard Stockton University in New Jersey this fall.

According to attendees, it was a great night, with both young men receiving many commendations for their community service projects.