The following is from First Night Maplewood South Orange: 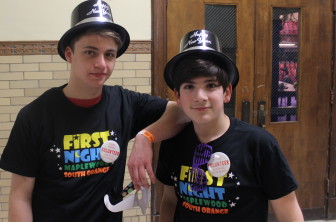 First Night Maplewood South Orange announced Monday that the annual New Years Eve celebration for the community will be back again this year and bigger than ever.

The annual celebration runs from 4pm-10pm at Columbia High School in Maplewood, NJ and will feature a wide assortment of entertainment and activities for all ages. This year will include a number of brand new acts, as well as returning favorites, such as Lisa Lou Circus Acts, Illestyle Hip Hop Dance Troupe and Doc Swan’s magical comedy. New this year is Circtaquelar, a thrilling, mind-boggling display of artistry and athleticism, a Laser Light show and Miss Nina, a high energy move-along concert for young children and families, plus plenty many more acts ranging from music to song to arts and crafts. A kid’s zone in the Main Gym will also be featured, with an assortment of bounce house activities that are included in the price of admission.

Tickets will be $20 after December 24 and at the door. However, until December 1, tickets can be purchased online for only $11 each! From December 1-December 24, tickets can be purchased in person at the following locations for $15 each: Kings Maplewood, Maplewood Library, South Orange Library and Sparkhouse South Orange. During that time, tickets will also be available online for $16 each. For all ticket purchases, children 3 and under are admitted free.

“We are incredibly excited to bring First Night back for another year,” said Michael Goldberg, President First Night Maplewood South Orange. “We had over 1000 people join us last year and we expect an even bigger crowd this year.”

The event is made possible through the generous support of the Village of South Orange, the Township of Maplewood, and our title sponsor, BCB Bank.

To purchase tickets or to get more information, please visit www.firstnightmwso.org.

First Night Maplewood South Orange was formed in 1993 to broaden and deepen the public’s appreciation for the visual and performing arts through an innovative, culturally diverse and high quality program on New Year’s Eve and to offer families and the community a shared cultural experience in Maplewood and South Orange that is accessible, affordable and drug and alcohol-free.