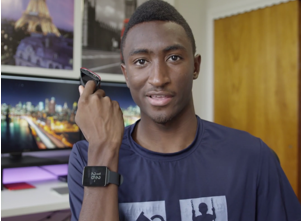 Maplewood native Marques Brownlee, a 20-year-old senior at Steven’s Institute of Technology in Hoboken, NJ, was recently profiled in Business Insider for his skill and prowess in reviewing technology.

Dubbed “the best technology reviewer on the planet” by former Google VP Vic Gundotra, Brownlee is described in the article as “arguably the best reviewer on the internet when it comes to explaining new technologies to the average consumer.”

If Brownlee’s name sounds familiar, that might be because his father, Marlon K. Brownlee, is a member of the Maplewood Township Committee. Clearly, the apple doesn’t fall far from the tree, as the elder Brownlee runs a successful information systems management consulting company.

“Marques’ mother and I are very happy that he is doing something that he loves – the extra acclaim that he gets for doing so is just icing on the cake,” said Brownlee in an email. “We are quite proud of the fact that he is able to balance all of the things on his plate so well – being an entrepreneur, showing leadership as the captain of his Ultimate frisbee team at Stevens Institute of Technology, and making the dean’s list in his studies.”