PHOTOS: South Orange 2017 Launches Campaign for Board of Trustee Election

The South Orange 2017 slate of candidates for the Board of Trustees kicked off its campaign on Sunday in the home of Matthew and Adena Traub. Incumbents Stephen Schnall and Walter Clarke joined newcomer Karen Hilton to mix and mingle with the crowd and discuss their goals for South Orange. 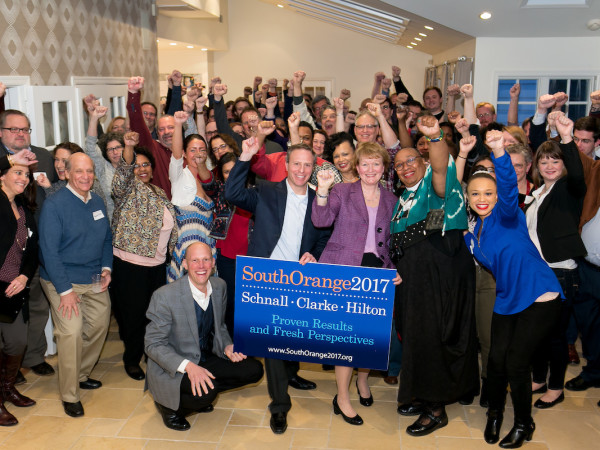 South Orange – Feb 12: Steve Schnall, Walter Clarke and Karen Hilton celebrate the launch of their campaign for Village Trustee at the home of Matthew and Adena Traub on Feb 12, 2017 in South Orange, New Jersey (Photo by Matt Peyton Photography)

Photos are credit Matt Peyton Photography. Click on any photo in the gallery below to begin.

Elected in 2013, Schnall has made his biggest mark as Chair of the Recreation and Cultural Affairs Committee where he successfully spearheaded an inter-local agreement with Maplewood and the Board of Education establishing dedicated funds to maintain and enhance recreation fields and facilities, began long overdue capital improvements to the Baird Community Center, introduced a series of new town-wide activities including South Orange Summer Nights, the South Orange Health and Fitness Challenge and the SouthNext Festival of Arts, Ideas and Music. Additionally, as Chair of the Public Information and Marketing Committee, the Village’s website finally got a makeover with new integrated software tools for communication, feedback, emergency alerts and customer service platforms to increase accountability and response time to residents.

“This has been an amazing experience for me working alongside my colleagues on the Board, our Village staff, and community volunteers,” said Schnall. “Walter and I have been working from the campaign platform that we introduced in 2013 along with Sheena using it as a checklist of what we said we would do and what we have done. I’m truly proud and humbled to have been given this opportunity and I hope our neighbors have been pleased with the progress we have made; recognizing that there’s so much more to do.”

Clarke, whom many peg as the “infrastructure and environment Trustee” led the Village’s water supply transition from East Orange Water Commission to New Jersey American Water which occurred over two years and officially changed over on January 1, 2017. Under his leadership as Chair of the Public Works and Infrastructure Committee, the Village has seen its road reconstruction and paving program triple in the number of roads completed per year, the creation of a Forestry Management Plan, and has received over $2.5 million in grants for road projects and the River Greenway. Clarke has also been very instrumental in introducing new sustainability initiatives, such as solar-powered mobile device charging benches, and has maintained South Orange’s Bronze Certification with Sustainable Jersey. The Village, along with Maplewood and Millburn, were jointly awarded the Sustainable Jersey Collaboration Award for advancing sustainability through partnerships in 2016.

“It’s amazing how four years go by so fast,” said Clarke. “While I’m very proud of our accomplishments, there are so many items on my list still to be done such as the town-wide bicycle plan and addition of a sustainability element to our new Master Plan; which will be going out for RFP this month. Also, while the transition to NJAW was a success, we’re still meeting regularly as a Water Committee as we implement much needed infrastructure upgrades to our water system.”

The slate is rounded out by newcomer but seasoned community volunteer and women’s empowerment activist, Karen Hilton. A 20-year resident of South Orange, Karen has been involved in various aspects of the Village including a former PTA President and served for 10 years on the South Orange Public Library Board and as President, oversaw and participated in the creation of a library master plan paving the way into the 21st century. Hilton, who has a Master in Public Administration and a strong background in strategic planning and fundraising, was the Founding Executive Director of Emerge New Jersey whose mission is to identify, encourage and train women to run for office. She most recently setup Emerge programs in both Pennsylvania and Michigan. Karen remains active in Emerge PA and NJ.

South Orange – Feb 12: Steve Schnall, Walter Clarke and Karen Hilton celebrate the launch of their campaign for Village Trustee at the home of Matthew and Adena Traub on Feb 12, 2017 in South Orange, New Jersey (Photo by Matt Peyton Photography)

“Volunteering and dedication to bringing about positive changes is a part of who I am,” said Hilton. “I’ve considered running before but the timing wasn’t right. I know this job entails a significant time commitment, evening meetings, weekends, and being responsive to constituent concerns. After the divisive presidential campaign, I was extremely energized by the Women’s March and I knew it was time to step up. If I am so fortunate to be elected, I’d be thrilled to work on the potential to integrate municipal offices into a newly renovated library and Connett building, providing more cost effective and streamlined services to our residents. I am also very passionate about being a liaison to the schools and taking a leadership role within the two towns ‘age-friendly’ initiative for which South Orange and Maplewood have received $135,000 to better retain, attract, and provide quality services to our seniors citizens.”

Village President Sheena Collum was quick to throw her support behind South Orange 2017. Both Schnall and Clarke were her running mates four years ago when she first took office as a Trustee. “This is certainly a ticket that I’m excited about and fully support,” Collum said. “We’ve all been on different sides of issues at times, but our occasional differences have never outweighed our commitment to doing what we feel is the best for our neighbors and our mutual respect for one another. I’m proud of the level and tone of discourse we have on the governing body and with our residents in how we approach challenges and I know that along with Steve and Walter, Karen will be a wonderful addition to the governing body.”

South Orange 2017 has also announced their campaign team which includes Reverend Sandye Wilson as Campaign Manager and outgoing Trustee Jeffrey DuBowy as Treasurer, who announced he will not be seeking election. DuBowy was appointed to the Board to fill the unexpired term of Collum after she was sworn in as Village President. “It was a pleasure serving our community for the past two years. I’m putting my full support behind South Orange 2017 and know that this is a slate comprised of some of the most thoughtful, hard-working and dedicated volunteers who will continue energizing and delivering for all members of our South Orange community,” said DuBowy. Rounding out the management team are Celina Herrero, and Rachel Ford who each have successful campaign experience.

The South Orange municipal election is on Tuesday, May 9.