Check the Village Green’s photo gallery of the grant ceremony today, with all photos credit Monta Harris. Click on any photo to begin. 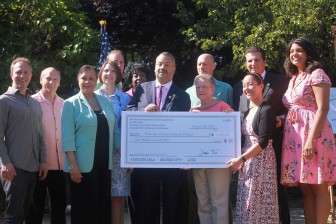 South Orange being awarded a $1,000,000 from the NJ DOT for the River Greenway Project

The following is from a press release issued by Congressman Donald M. Payne, Jr.’s office.

The Village of South Orange announced today that is has been awarded a $1,000,000 grant under the New Jersey Department of Transportation’s (NJDOT) Transportation Alternatives Program for its ongoing River Greenway Project, a comprehensive plan to connect the northern and southern borders of the Village with a single trail.

“As a community, we all know how critically important this award is to completing the River Greenway,” said Payne. “South Orange Village is a leader in our state for its commitment to the environment and the promotion of alternative modes of transportation. This grant enables the Village to enhance access to downtown South Orange, reduce our environmental footprint, and increase connectivity within and between Maplewood and the Village Center.”

The grant will help fund the completion of River Greenway, which comprises a 3,600 foot pedestrian path and bikeway that connects the southern border of the Village at Chyzowych Field in Maplewood to Third Street near the South Orange train station in the Village Center. The completed project will add tremendous value to the community through a convenient and efficient transportation alternative and a safe, enjoyable outdoor experience.

The River Greenway Project was one of only 28 projects to receive funding under the Transportation Alternatives Program. The grant is one of the largest, if not the largest, to ever be awarded to South Orange.