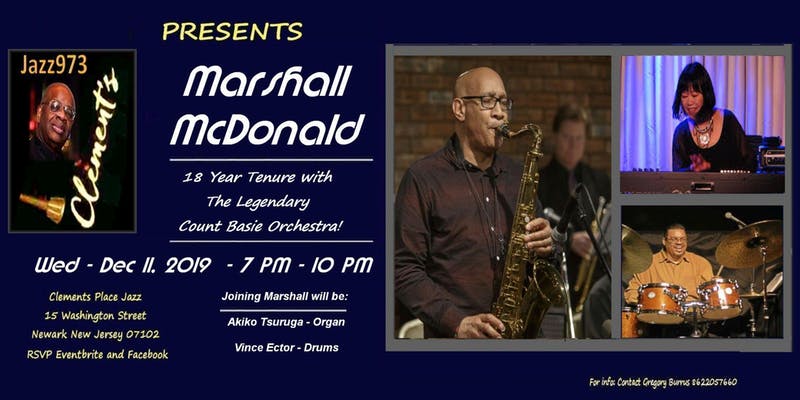 Whether you heard him playing Lead alto during his 18 year tenure with The Count Basie Orchestra, or playing tenor saxophone with Paquito D’Rivera or baritone saxophone with Abdullah Ibrahim or clarinet solos with The Duke Ellington Orchestra, Marshall keeps the swing and dance that he learned in his hometown of Pittsburgh, at the heartbeat of his playing. A seasoned reedman, having played over 30 years in the New York City area, he is known for his ability to play all of the saxophones and woodwinds, with a unique approach to each one.

Marshall was offered the baritone saxophone chair with the great Lionel Hampton on New Year’s Eve 1990 which included special guest Nina Simone. Lionel learned that Marshall played clarinet, alto and tenor, and soon had him playing clarinet solos on Flying Home, Brand New Baby and Memories of You, and rotated him between alto in the big band, to tenor sax in the small group. This led to a 10 year stint with Mr. Hampton, learning from the master, and playing jazz festivals and concerts all over the world. Marshall was honored to play in the Lionel Hampton Orchestra along with Wynton Marsalis, Illinois Jacquet, President George H. Bush and Cyrus Chestnut at the Royal Jazz funeral for the maestro, New Orleans style.

Marshall also toured and recorded with Paquito D’Rivera and the United Nation Orchestra starting on alto and soprano and moving to tenor and baritone for 6 years. Marshall plays baritone sax on the Grammy Award winner, Best Latin Recording, Paquito D’Rivera-Tropicana Nights. Frank Foster, Leader of the Count Basie Orchestra heard Marshall a few times in NYC bands, and Mr. Foster called upon him to fill Kenny Hing’s solo tenor sax chair as a substitute in 1994, which began an over 20 year relationship with the famous Orchestra. Mr Foster also gave Marshall a stint on the Lead alto chair in his own Big Band, The Loud Minority. During this time he also played 2nd alto with The Illinois Jacquet Big Band, Lead alto with The Charli Persip Supersound Band, tenor saxophone with The Bobby Caldwell Band, and 2nd alto, clarinet and flute with The Chico O’Farrill Orchestra. Playing with Chico O’Farrill led to a close up in the Pierce Brosnan movie, The Thomas Crown Affair during the famous ballroom dance scene, and participation in the historic jazz movie, Calle 54.

Marshall moved from 2nd alto to lead alto after the retirement of the great Jackie Kelso under the leadership of 54 year Basie veteran, Bill Hughes. Playing Lead alto in the Basie Band was the thrill of a lifetime, from high school through college, Marshall had always played Lead alto in the big bands, and now he was holding down the lead alto sax chair famously held by the great Marshal Royal. He learned first hand from, Danny Turner, and Mr. Turner explained to him, “The style of lead playing in the Basie band was passed down from Marshal Royal to Bobby Plater and then to me.” Now it was passed down to another Marshall. Marshall had studied the Basie style while in music school at University of Pittsburgh and played with the great vocalist Joe Williams with the Pitt Jazz Band, and now he was getting first hand schooling from Danny Turner, Frank Foster, Kenny Hing and John Williams.