A Letter for Sharon Duberman Geraghty: She Made a Difference

Sharon Duberman Geraghty of Maplewood passed away last week. The following is from her husband Michael: 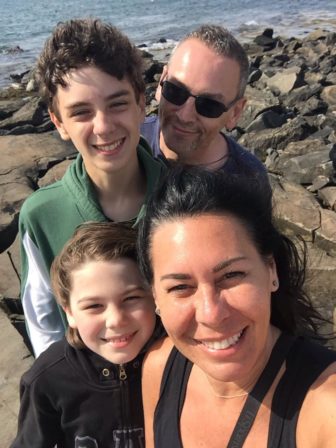 Despite her illness, Sharon thought she was the luckiest person alive because of the friends she had and the community she lived in. She could not believe the continuous arrival of gifts, cards and letters, showing love and support which made her feel really special.

She had intended to arrange a picture of all the gifts and post a thank you message to all of you but something always got in the way.

She could not believe that you had orchestrated a flash mob outside the house — this made her clap her hands and cry with joy.

She raised two beautiful boys and I was lucky enough to have a front row seat to watch. For her, the children, and not just her own, were everything, and she could not stand to see a child in distress.

Sharon made a difference in kids’ lives by getting school supplies and computers to them, doing their makeup for the school play, fundraising at the book fair or simply telling them how smart or pretty or funny they were.

Kids of all ages seemed to instinctively trust and believe her.

There are few people that can express themselves as clearly and precisely and humorously as Sharon – she was a straight shooter and a terrific communicator with people of all ages and thankfully those qualities have passed on to the tall one and the slightly shorter one.

The boys and I, Sharon’s sister Jen and her mother Judith have our memories and the stories you have shared to keep her alive in our hearts.

Thank you all for supporting us through this insane time.

Thinking of kids suffering with cancer made Sharon break down. For anyone who is interested in making a donation in her memory, please support St. Jude Children’s Research Hospital.

At the moment Sharon’s family is planning a small, private memorial service.

A public memorial gathering will be held for the community at a later date; specifics to follow in the new year.
Sharon Duberman GeraghtySt. Jude Children's Research Hospital
0 comment
0
FacebookTwitterPinterestEmail