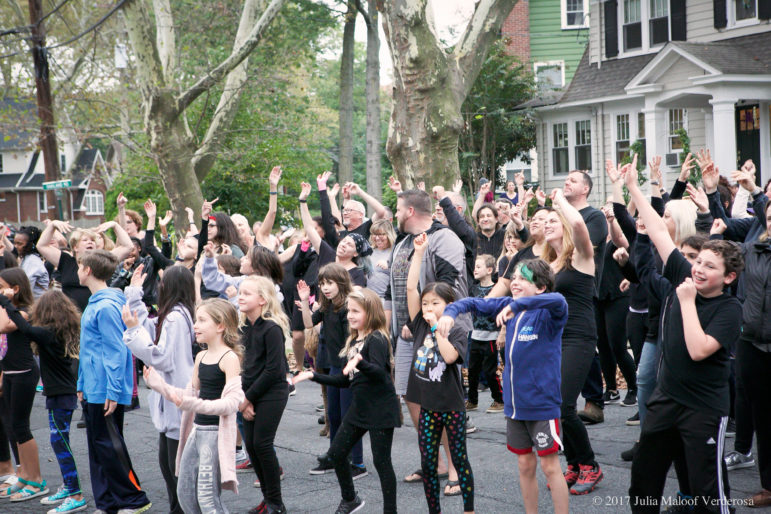 This article, posted originally on October 15, 2017, was updated on December 15 as follows: We’ve heard the devastatingly sad news that Sharon Duberman Geraghty passed away last night. We will post information about memorial services when we hear more. In the meantime, we wanted to celebrate Sharon’s life by reposting this testament to the love affair between Sharon and all of SOMA

More than 100 residents of South Orange and Maplewood gathered outside one home on Oakland Road this evening to bring cheer to their friend and neighbor Sharon Duberman Geraghty.

Geraghty is the outspoken, down-to-earth, direct and energetic co-administrator (with Kristen Cook Tyler) of the phenomenally popular SOMA Lounge Facebook group. Locals rely on SOMA Lounge for recommendations, tips, camaraderie, kvetching, community and more. Sharon has also been an active volunteer with the Clinton Elementary School PTA and the South Orange Middle School Home School Association and is a passionate advocate for local children.

In May, Geraghty announced via Facebook — because Facebook “unfortunately is the easiest way for me to communicate it” — that she had been diagnosed with stage 4 colorectal and liver cancer and was beginning treatment.

“Let’s lift Sharon’s spirits with a flash mob outside her house. … The song is ‘We are Family’ by Sister Sledge. Because we all love this woman like family, and we want to bring a smile to her face. Bring your family, invite your friends — the more people the better. Just don’t share this on any public Facebook forum because you know Sharon will be all over it.”

Community members felt that lifting of Geraghty’s spirits was the least the community could do for all the positivity she has brought to Maplewood and South Orange.

Beck enlisted help for video and sound. Danielle Ferland provided choreography and coaching, and dozens pitched in including the Maplewood Police and Mayor Vic DeLuca, who joined the mob.

“We just want Sharon to know that this entire community is pulling for her,” wrote Beck.

Geraghty waved her thanks to the crowd from her upstairs window.

Geraghty’s family and friends contacted Village Green to say that they wanted to thank “Maplewood Committeeman Frank McGehee and the Maplewood Police Department for their cooperation and support in making sure the street was safe for the flash mob.”

And another angle, courtesy of Claire Gianni Sinclair: