Why We Launched The Village Green

Last night, we hosted a launch party for The Village Green at Coda Kitchen & Bar in Maplewood.

As we looked around the room at a number of our freelance writers and photographers, local elected officials, members of our business community who were early supporters and advertisers, friends and family, we felt satisfaction in making it this far — and excitement about the work ahead of us.

The Village Green started this past February in Carolyn’s living room as some of our former Patch colleagues met to chat about the state of news reporting in our towns. In January, Patch had changed hands from AOL to Hale Group and a majority of staff — including editorial — had been laid off.

Most of us in the room had left Patch already, having seen the writing on the wall, and had already begun to hear the complaints from our former readers: “What happened to Patch?” “Can you bring it back?” “Can you start your own news site?”

Whether we were grocery shopping, grabbing a bite, or at our kids’ school events or games, locals would stop us to bemoan the fact that high-level, journalistic coverage of school board meetings, community events, public safety, businesses and government had virtually disappeared from our two towns.

On that night in February, we decided the time was right to do something about filling this void for Maplewood and South Orange — with an eye toward Millburn down the road.

Mary had been working for the past year at the Center for Cooperative Media/NJ News Commons at Montclair State University. There, she supported the work of Debbie Galant, formerly of Baristanet (where Carolyn also previously worked), to help independent local news sites throughout New Jersey grow and thrive. The experience clued Mary in to the few sides of hyperlocal publishing that she hadn’t learned at Patch.

With the help of a seed grant from NJ News Commons and the Dodge Foundation, we began to figure out what platform to build our site on, whom to hire as a developer and use as an ad server. We created a business plan, formed an LLC, drafted a partnership agreement, hired a lawyer, a bookkeeper, a graphic designer. We found an amazing and dedicated ad sales representative, Shana Teitelbaum, who has become an invaluable part of our team.

We are certain we are forgetting someone, because the truth is: everyone we’ve hired or interviewed, who has advertised or signed up for the newsletter, who has read the site or contributed comments and news tips, has been a part of building The Village Green. We thank you for your support, your cooperation, your interest and your participation.

And we thank our former bosses and our ridiculously talented and dedicated colleagues at Patch, Baristanet and The New York Times Local, where we got indispensable on-the-job training that taught us how to serve a community with online journalism.

Those hyperlocal sites built an expectation for high-quality local journalism in our towns. Now, we know how to deliver it. And we intend to — for a long time to come. 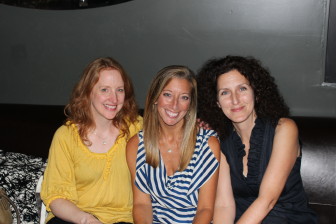 LETTER: Pancholy & Meyer Have the Commitment &...