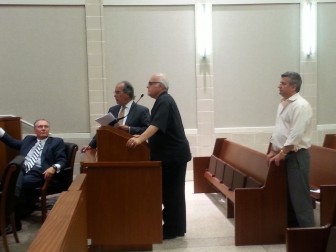 This article has been updated with comments from Mayor Vic DeLuca and Township Committeeman Marlon K. Brownlee.

Representatives of Daibes Enterprises LLC, the developer for a mixed-use residential and commercial building on Springfield Avenue across from the Police & Courts Building, appeared before the Maplewood Township Committee Tuesday night to give an update on work done thus far and ask for approval to move forward with the beleaguered project.

The development, which will feature more than 5,000 square feet of retail space and six apartments above, broke ground in January 2013 and since then has been plagued by delays. However, work has been slowly progressing since April, said Mayor Vic DeLuca in an email. 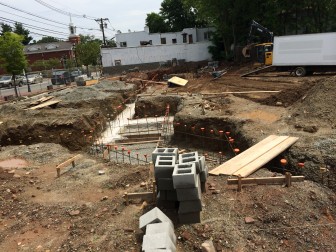 “There are trenches dug for the foundation,” said DeLuca. “Blocks are in place and cement is due this week…There was a week when work did stop due to soil certification but that is being resolved.

I am the first to admit that work is slow at the site but the TC has pressured the developer to do the work and they are moving ahead with the project,” DeLuca said.

The TC considered terminating the agreement with Daibes twice before: in October 2013, and again in April 2014. After each time, Daibes’ attorney assured the committee the developer was sincere in its wish to proceed and the TC agreed to allow them to move forward.

At that point, Daibes submitted a performance bond as a guarantee that the project would be completed.

At Tuesday’s meeting, DeLuca asked the three men — Daibes’ attorney Joseph Vena, Berek Don from Daibes, and a principal from the subcontractor Lita Brothers Construction, to explain the most recent holdup since April. 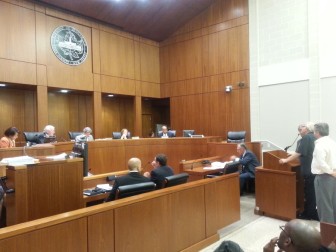 Don explained that environmental concerns — namely, underground oil tanks that needed to be removed and soil remediated — had caused the delays. Daibes is currently waiting for a letter of approval from the Department of Environmental Protection, which he said is “forthcoming.” However, he explained, construction would not be held up in the meantime.

“Environmentally, we’re good,” said Don. The contractors poured some of the concrete for the building’s footings today, and plans to complete the framing and roofing by the end of August, Don said.

Don assured the committee the project was on track to be completed by the end of this year. “That’s where we’re headed,” said Don.

According to a letter submitted by John Lita of Lita Construction, the following is the timetable for the remainder of the project:

Larrier asked if the schedule for completion could be submitted by no later than September 30, 2014. Lita said it could. Brownlee noted that the project had to be completed no later than June 2015, when the performance bond will expire.

In a telephone interview Wednesday morning, Brownlee said he would describe his feelings about Daibes’ progress report as “guarded.”

He said that for a long time, Daibes had not lived up to what they intended to do. “They have given so many excuses,” he said. “There was not a lot of progress for quite a period of time.”

Referring to Tuesday’s report, he asked, “Is this the continuation of the same story we were hearing all along?” and said he did not think the developer fully explained the delays that have beset the project.

“I was not entirely satisfied,” Brownlee said.

That said, Brownlee noted, Daibes is not in violation unless they do not meet the June 2015 completion deadline. 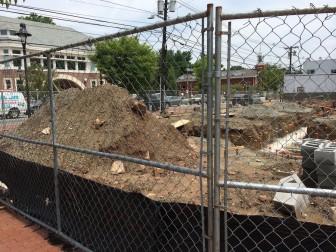 Asked if the TC would have considered taking further action if the progress report had not been satisfactory, DeLuca said, “Not at this time. We gave them a window of April to December. We may have requested additional data and meetings between our building department and the developer but we would not have pulled the plug.”

DeLuca asked that someone from Daibes appear at the September township committee meeting to affirm the rest of the construction schedule. Vena asked if a personal appearance was necessary.

“If we see it up in the air, Mr. Vena, if we see a roof there, if we see things happening, then we can chill out,” said DeLuca. “But honestly we have to keep this project on a short leash.”

Brownlee said in the phone interview that he “wholeheartedly agreed” with DeLuca’s insistence that the developer continue to update the TC at meetings and that he found it “odd” that Vena was so “insistent” on questioning that point.

“It’s the one thing that keeps them moving forward,” said Brownlee.