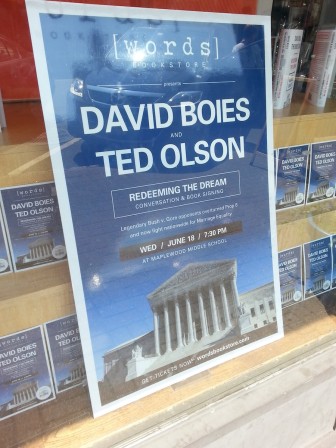 David Boies and Ted Olson, the legendary attorneys who joined forces to bring about a landmark 2013 Supreme Court ruling for gay rights, will appear together at Maplewood Middle School on June 18 at 7:30 p.m.

Hosted by [words] Bookstore in Maplewood, the event features the duo in conversation about their new book, “Redeeming the Dream: The Case for Marriage Equality,” and will sign books at the event.

The book tells the fascinating inside story of the five year struggle of Boies and Olson — who had once argued against each other in Bush v. Gore — to win the right for gays to marry.

Get your tickets now for this exciting event.