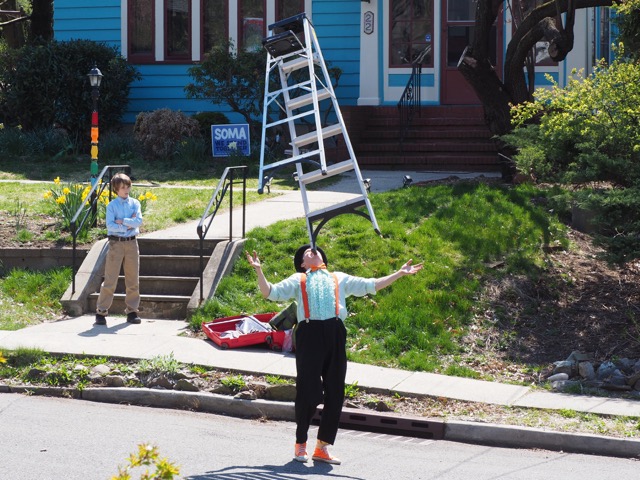 A former Ringling Bros. circus clown brought joy the hearts of young and old in and around the Borden Park neighborhood in Maplewood on Easter Sunday.

“I performed from the street or sidewalk so people could watch from their porches or drives,” said Kraft. “I’m trying to keep the feel good ju-ju going.”

That ju-ju was built over the past few years as Kraft conducted a rather large-scale Easter Egg Hunt in Borden Park.  “It couldn’t be done this year for social distancing reasons,” said Kraft, “so in lieu of the usual egg hunt, I strolled around the neighborhood juggling, unicycling, fire eating, ladder balancing, etc.”

Charlotte, age 4, was impressed: “After he juggled fire, he actually threw it in his mouth!” Charlotte’s mom Katy Collins said Charlotte knows this is something you don’t try at home. Charlotte said the fire eating was her favorite part: “Yes, cause it was so cool.”

Charlotte also liked when Kraft balanced a ladder on his on head. “That was cool. I didn’t know how strong he was.”

Collins explained that neighbors, led by Colleen Breslin, initially wanted to get someone in an Easter Bunny costume to walk around in lieu of the egg hunt: “But then we couldn’t secure an easter bunny suit.” They reached out to Kraft as the egg hunt organizer. “Everyone knows him as the Easter Egg guy,” said Collins, and found out about his clown abilities. “I didn’t even know Kevin did that!” said Collins.

On Sunday morning, be-masked neighbors came out to see Kraft, some on porches, some at doors, some sitting along the curb. With his event gigs all canceled, neighbors contributed money to pay Kraft. People were in their drives or sitting on their curbs. Two cars went by. “It really exceeded my expectations,” said Kraft.

“Colleen Breslin [a Borden Park neighborhood organizer] truly went above and beyond to make today happen, organizing my route, texting and calling me throughout the day,” said Kraft. ‘She was fantastic.”

As the neighborhood association organized the event, Breslin reached out to the Township to make sure the event did not violate Maplewood’s social distancing policies. A green light was given but the Mayor Frank McGehee stressed how important it was that Kraft and all participants practice safe social distancing throughout, including wearing masks and avoiding any kind of crowd gatherings. The association highlighted these for participants.

Kraft visited other nearby streets too. “We were so happy that a couple of neighbors organized Kevin coming to our block of Midland Blvd.,” Kelly Mortimer told Village Green. “After four weeks of staying home, his performance raised our spirits!”

Kraft will be offering distance entertainment “Sidewalk Shows” during the pandemic. He can be reached at kevinkraft42@gmail.com or 917-312-7594.

“It was such a good experience,” raved Collins. “I would so much recommend hiring him. It was such as cool, unique experience that everyone could participate in safely and from a distance.”