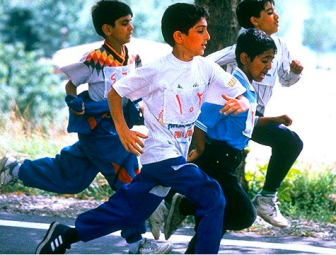 Children of Heaven (1997), Directed by Majid Majidi, will be shown as part of the Cinema of Iran Series.

Explore the origins of modern film, discover influential filmmakers, and discuss the styles and philosophical messages of the films when you become a Film Club Member. La Cinémathèque Film Club screenings feature classic films by renowned foreign filmmakers in the SOPAC Loft.

Bridging the gulf of understanding between cultures can often feel insurmountable. With stories of Islam and its extremes filling our news on a daily basis it is easy to think of Iran in terms of its politics rather than its people. The Iranian Film Series is a chronological approach to learning about Iranian cinema over the last 50 years showcasing films from five of the most important Iranian directors. Through the lens of the filmmaker you will see a culture that is exceedingly complex and is a powerful influence throughout the world.

To attend, BECOME A FILM CLUB MEMBER for just $65.

Please note: Film Club Memberships are available for sale in advance of a series and through the second film screening of a series as the discussions around each film build upon prior events. 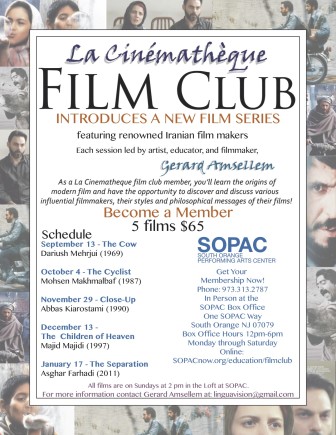 Gerard Amsellem is a French and American citizen. He spent the first 25 years of his life in Paris, France where he studied painting at the University of Paris and earned his Masters Degree in French Literature and Art History. In 1982, Gerard moved to the U.S. and continued to paint and develop his interest in film. His paintings have been exhibited in abroad in Paris and locally at GAS Gallery & Studio and at 1978 Maplewood Arts Center. Gerard has been studying film throughout his life. He currently teaches World Film at Livingston High School and has directed several short films. Gerard’s special interests lie in foreign and independent films from all over the world.

Questions about La Cinémathèque Film Club can be directed to Gerard Amsellem at linguavision@gmail.com.