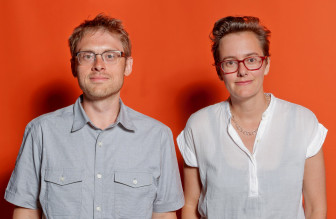 Maplewood-based filmmakers Sarah Klein and Tom Mason are enjoying the spotlight recently due to the fact that TheAtlantic.com began posting their documentary short series “On Story” this fall. In fact, the second short film in the series — “George Saunders: On Story” — was released on TheAtlantic.com on December 8.

The series, which profiles artists, musicians, politicians and more, crackles with life due to Klein and Mason’s interesting visual style that veers far from the usual “talking heads” personal profile documentary.

For the On Story series, Klein and Mason interviewed Saunders — one of the nation’s most lauded and original short story writers — at Syracuse University where he teaches. However, the short was filmed largely in and around Maplewood, as the filmmakers used puppetry to “animate” Saunders’ process and bring it to life. 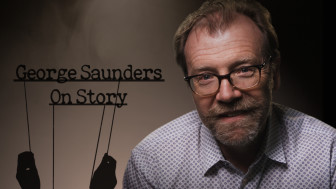 Klein and Mason have been making films together for almost a decade and founded Redglass Pictures together in 2008. Klein and Mason have co-directed everything from short installation pieces for the Beijing Olympics to a large-scale installation series for the National Museum of American Jewish History, 18 short films for a digital series on Cancer for Ken Burns and PBS, and also filmed President Obama and First Lady Michelle Obama for a large installation series at the USA Pavilion at Expo Milano.

Klein and Mason’s “On Story” is part of an ongoing storytelling series executive produced by Ken Burns, courtesy of PBS.

Klein recently explained the “On Story” process — particularly as it relates to the George Saunders piece — in answer to questions submitted by Village Green:

VG: Are you both animators?

Klein: The truth is – NO. But, we do believe that every film we make demands a visual treatment that will best communicate the story. Because of that we are often experimenting with many different styles and techniques and that sometimes takes us to unchartered territory. In this case, we took a leap of faith and went with puppets. We filmed many of the elements against green screen and painstakingly layered them in After-Effects.

VG: The choice to animate the interview: why was that made?

Klein: We knew early on that we wanted to create a unique visual language that in some ways evoked the magical and bizarre world George Saunders writes for his own characters. Chain-smoking shadow puppets, tattooed lovers, and magical black boxes just felt like a natural choice.

VG: How many more of these “On Story” shorts are coming from you two?

Klein: We are planning to release 6-8 more of these featuring visionaries from different fields: a musician, a chef, a political strategist, a comedian…etc. The key to each of these is to really try to understand what makes a story great and how these great stories impact every part of our lives.

VG: What else is next for you?

We are working on a short documentary right now that involves a new marriage, a lost book, an important memory, and a letter from Judy Blume.