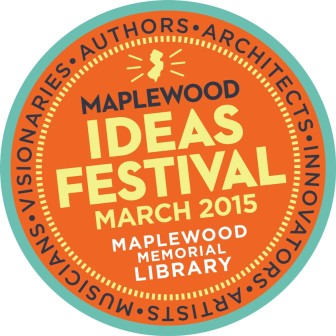 The festival officially kicks off with an Art & Music Reception on Saturday, March 14 at 2 p.m. at the Library’s Main Branch. The music of Django Reihnardt will be performed by Martin Leys and Friends.

Last year’s festival was a roaring success, with the Maplewood Literary Award presented to Judith Viorst, and other guests including David Brancaccio and Alex Gibney.

Library Director Sarah Lester had the original idea for the Ideas Festival. “She wanted to model it after the New Yorker Festival, but have everything free and centered on local people, or people with local roots, from all areas—artists, musicians, filmmakers, community leaders, innovators, tech people, journalists, authors,” said Joanne Beckerich, director of Adult Programming/Publicity for Maplewood Memorial Library.

Although the festival is free, some programs require registration. Visit maplewoodlibrary.org for more information. Except where noted, all programs will be held at Main Library. This year’s events are as follows:

Mikel Frank and Gerard Amsellem, the Visual Passion Duo, will exhibit their work from March 2 through April 4.

Richard T. Morris, co-author of the award-winning children’s book ‘This is a Moose,’ and resident of Maplewood will lead families in Word Games With Moose! on Monday, March 16 at 7 pm at Main Library. The Moose will be here LIVE with Morris to have fun with words, read a few books, and have a laugh out loud good time with language. For children ages 3 ½ – 9 and their parents.

Explore the World of Edible Colors with Children’s Book author and illustrator, Maplewoodian Jennifer Vogel Bass on Wednesday, March 18 at 4 pm at Main Library. Come play with your food! A delightful discovery of the many shades of fruits and vegetables. An interactive event for kids ages 3 ½ – 6. Older children welcome, too.

A launch party for our new Create Space will be held at the Hilton Branch Library on Saturday, March 21 from 10 am to 1 pm. Participants will be able to create and print a custom Duplo using Rhino 3D CAD and work on Raspberry Pi, Snap Circuit and craft projects. This program is in conjunction with NJ Makers Day, a day dedicated to celebrating and sharing Maker Culture.

A highlight of the Festival will be world-renowned architects Richard Meier and Peter Eisenman, in conversation at Columbia High School on Monday, March 23 at 7 pm. Meier’s achievements include the Getty Center in Los Angeles and the Museum of Contemporary Art in Barcelona. Among many worldwide projects, Eisenman designed the University of Phoenix Stadium, which hosted this year’s Super Bowl, and the Berlin Holocaust Memorial. Both are graduates of Columbia High School. Registration is required. Register at ideasfestivalarchitects.eventbrite.com

Marc H. Morial is President and CEO of the National Urban League, the nation’s largest historic civil rights and urban advocacy organization. He was Mayor of New Orleans from 1994-2002 and currently resides in Maplewood. His talk, 20th Century Lessons for 21st Century America, will be held at Main Library on Wednesday, March 25 at 7 pm.

Marylou and Jerome Bongiorno, Emmy-nominated, award winning, husband-and-wife filmmakers, will screen their new film, Love and Arguments, on Thursday, March 26 at 7 pm at Main Library. Love and Arguments is a film festival of fiction shorts; urban love stories that tackle truth, commitment, stereotypes, and morality, including some contemporary interpretations of stories by Jane Austen, Henry James, and Edith Wharton. The Bongiornos create cutting-edge documentary, fiction, and museum installation art films that are widely distributed. They are the recipients of major grants and fellowships and were commended by the State of NJ and the City of Newark for their contributions to cinema and public knowledge.

Internationally acclaimed author and Columbia High School graduate Paul Auster will receive the Maplewood Literary Award on Saturday, March 28 at 2 pm. The event is free, but tickets are required. Register at literaryaward-paulauster.eventbrite.com.

Broadway and Hollywood Costume Designer Ann Roth will be the featured guest on Monday, March 30 at 7 pm. Roth won an Academy Award for The English Patient and a Tony Award for The Nance.