Parishioners of St. Joseph’s Roman Catholic Church in Maplewood know that Fr. Jim Worth has fostered a robust musical ministry in the years since he became pastor. That special feature of parish life and liturgy has enlivened services for many, but no-one more so than Ben Hack, a 22-year-old who lives with autism.

“I met Ben a little over 7 years ago when I became pastor here at St. Joseph Parish. He was one of the first people to welcome me with his infectious smile,” Fr. Jim told Village Green.  “Even though Ben is partially non verbal, he makes up for it with his facial expressions of love and joy as well as his compassionate gestures. It’s so easy to like Ben. He smiles all the time. He comes up to you and greets you with enthusiasm. I truly see the face of Christ in him.” 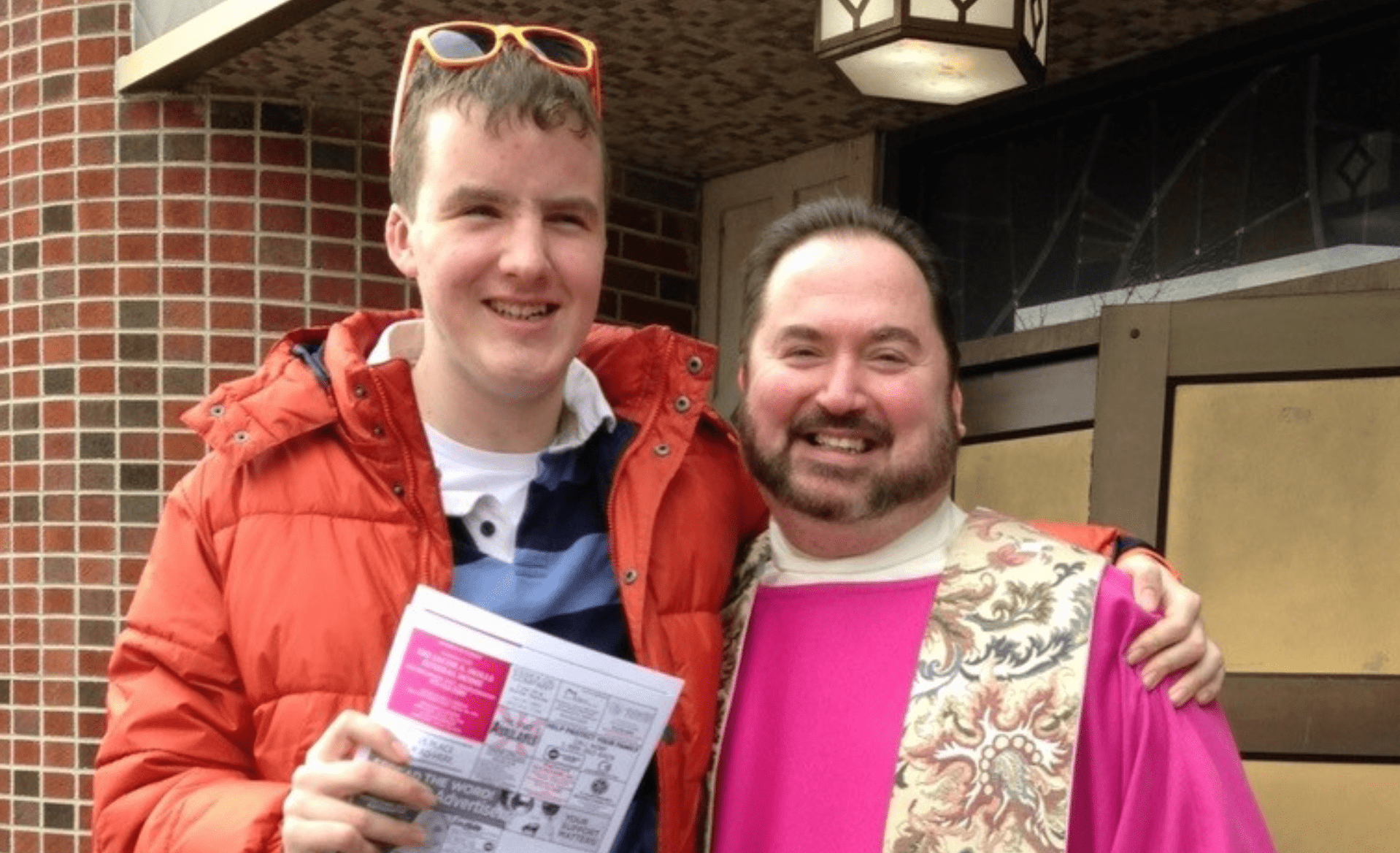 Ben Hack and Fr. Jim Worth, pre-COVID, at St. Joseph Church in Maplewood

Fr. Jim adds, “He shows up and is fully present to everything here at the church. He never misses any of my musical meditations. He is a blessing.” As CBS 2 News recently reported, Ben attended church every Sunday morning at 9 a.m. with his family in addition to those musical meditation.

Not surprisingly, Ben was devastated when he couldn’t attend St. Joe’s due to the COVID-19 pandemic. Not going to church meant not seeing Fr. Jim — whom Ben’s mother Mary Beth Walsh says is Ben’s “hero” and one of the few people with whom he has a deep personal connection.

So Father Jim began hosting virtual concerts for Ben that have simultaneously brought his entire congregation closer together. Watch one of the concerts here on Facebook.

“These concerts for him were a crucial point of continuity,” Ben’s mom told CBS 2 News.

“Music breathes life into my ministry,” says Fr. Jim. “I’ve been involved in pastoral music for almost 40 years. I believe God is using this gift to touch the minds and hearts of people. I’ve always had a song in my heart and pray I always will.”

During the virtual concerts, Fr. Jim wears orange glasses for Ben — orange is Ben’s favorite color and he puts his own glasses on at home when he sees Fr. Jim don his. “Ben reminds me to always keep my focus on the patience of Christ,” says Fr. Jim. “He sees life though his orange framed glasses. I think we all would benefit from his view on life.”

“Father Jim provides a great example of being concerned about his parishioners, including those with disabilities, one person at a time and in a way that is natural for him,” says Anne Masters, Director, Office for Pastoral Ministry with Persons with Disabilities, at the Archdiocese of Newark. “It’s time to change the false narratives about individuals with disabilities, and to imagine new possibilities instead of following the old stereotypes.  Everyone can grow and flourish when provided with appropriate supports, such as what Father Jim and the parish have given Ben.”