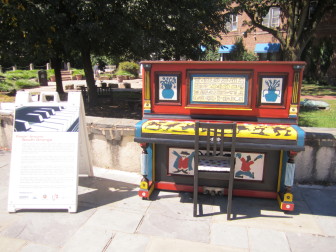 A painted piano from Playin’ South Orange 2013. Courtesy of SOPAC

The second annual Playin’ Around South Orange hits the streets of the Village Center this Saturday, Aug 23, from noon to 1 p.m. as professional musicians play the newly unveiled and fancifully decorated pianos at various locations.The six piano locations are:

The pianos will be available for the public to enjoy and play through October 6.

Every succeeding Wednesday, a jam session will take place 5-7 p.m. at the Sloan Street Gazebo.

The pianos will be auctioned at the end of the display, with proceeds benefitting South Orange Performing Arts Center‘s education programming.

Artists selected through an application process have been working through the month of August decorating the pianos. Themes range from a tribute to the “genius of soul, Ray Charles” to a piano painted as an extra fun and colorful cat, complete with pedals as paws.The ArtistsBill Billec is a South Orange resident and a Graphic Designer and Artist with over 20 years of experience. His concept is a car theme riffing on the number 88, the number of keys on a piano. “I was inspired by Ike Turner’s piano playing in the 1951 Rhythm and Blues song, ‘Rocket 88,’ which is about the Oldsmobile 88, [which is] considered the first Rock n Roll Song.” Billec hopes to inspire the piano players to play some 50s rock and roll songs as well as other songs about cars. www.billbillec.com

Maeva Fouché, a Newark native, has been influenced by urban life, African and Carribbean culture as well as the works of Pablo Picasso, Jean-Michael Basquiat and Andy Warhol. Her idea for the piano is to create faces with bold bright colors. “People have said to me that my work makes them feel happy! Playin’ Around South Orange would be a great way to spread that feeling of ‘Happiness.'” www.maevafouche.com

Lawrence Ciarallo, from Hoboken, plans on creating an homage to “The Genius of Soul,” legend Ray Charles. A firm believer in public art and often inspired by an artist’s body of work, Ciarallo paints portraits as a way to inform. “Portraits are a great way to start a conversation about someone. With Playin’ Around South Orange, what better way to start a dialogue about great music created on a piano than to immortalize someone who played it so well.” www.lawrenceciarallo.com

Sarah Walters of South Orange was inspired both by her son and her mother for her piano. She recently took up painting as a form of therapy to deal with the diagnosis of her mother’s Alzheimer’s disease. She has painted a tribute to her mother’s pet Madeleine, transforming the whole piano into a cat.

“Mac” McPeters is from West Caldwell and teaches in the Morris School District. McPeters has also been a carpenter, cabinet maker and a draftsman. “I have been doing art for a long time though my feelings are that with each new piece, it starts over.”Faculty and students of Seton Hall University have decorated the piano at the University.The South Orange Performing Arts Center, the Village of South Orange, Seton Hall University and South Orange Village Community Alliance (SOVCA) present Playin’ Around South Orange, which is sponsored by PNC Bank.