From Cinema Lab/The Village at SOPAC:

Rainbow Youth Alliance SOMA, led by Joseph Geoghan, a 16-year-old Maplewood resident, is hosting a public screening and reception of the award winning documentary film CURED at the Village at SOPAC on Tuesday, Dec. 14 at 6 p.m. with filmmakers Bennett Singer and Mridu Chandra and a special guest, actor Patrick Wilson. This ticketed event benefits the Rainbow Youth Alliance and is sponsored by Cinema Lab, PFLAG National and the township of Maplewood.

“It’s really great to live in a place like SOMA, where being an out LGBTQ+ person is supported and we have school groups and community groups like Rainbow Youth Alliance but, even here, kids can sometimes have  trouble feeling like they belong,” said Geoghan, who attended Marshall, Jefferson and Maplewood Middle schools, before attending high school at Morristown Beard. “RYA would like to see being LGBTQ+ normalized and visible so that it’s less traumatic to  come out and easier to feel included. When you watch CURED, it hits you that it was really not long ago that being  gay was considered an actual disease, but the film also highlights how far we’ve come as a society. And that we  can do better.”

“I was absolutely thrilled when Joseph reached out about using CURED as a way to bring together community members for an intergenerational event,” adds Bennett Singer, who spent five years producing and directing the  film. “Now is a great time to learn about the history behind some of what we’re seeing today, and how people with  good intentions and science on their side successfully challenged myths and prejudices about being LGBTQ+.”

CURED is an award-winning documentary that illuminates a pivotal chapter in the struggle for LGBTQ equality: the  campaign to remove homosexuality from the American Psychiatric Association’s manual of mental illnesses.  Before this momentous 1973 decision, the medical establishment viewed every gay and lesbian person as  diseased and in need of a cure. Business and government used the mental-illness classification to justify  discrimination and bigotry. If lesbians and gay people were “sick,” progress toward equality was nearly  impossible.

“Youth are leading us!” wrote Maplewood Mayor-elect Dean Dafis, who will be Maplewood’s first openly gay mayor. “When local teen [Joseph Geoghan] noticed that others like him were quietly struggling to come out because of depression or bullying even in a rainbow community, he decided to do something about it. Hence the new SOMA Rainbow Youth Alliance. Please join me in supporting the LGBTQ+ organization’s first event, the screening of CURED at SOPAC on Tuesday night.” 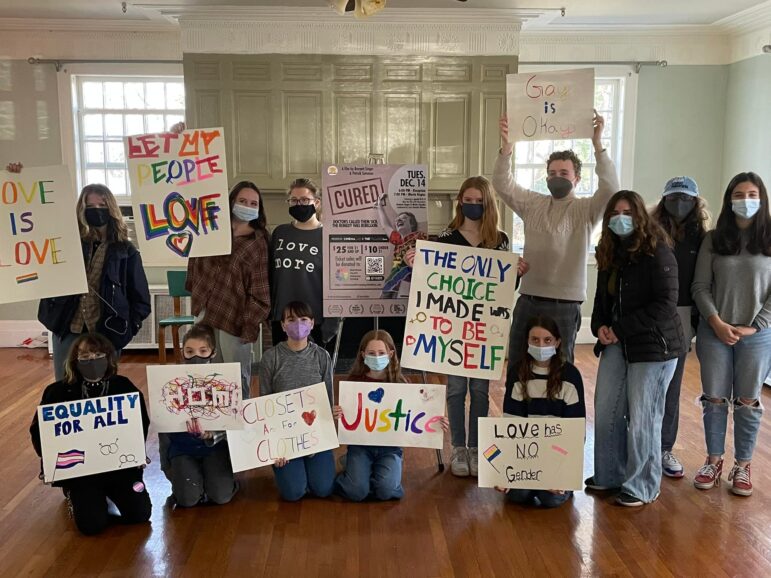 WHO: Actor Patrick Wilson and CURED filmmakers Bennett Singer and Mridu Chandra. TICKETS: $25 for 21+ and $10 for under 21

NOTE: This film contains discussion and imagery that some children, particularly those under 12, may find difficult.

Bennett Singer has been making social-issue documentaries for more than 25 years. He co-directed ELECTORAL  DYSFUNCTION (PBS) and BROTHER OUTSIDER: THE LIFE OF BAYARD RUSTIN (PBS’ POV), which premiered at  Sundance and won more than 20 international prizes, including the GLAAD Media Award. Singer won a DuPont Columbia Award for his work on EYES ON THE PRIZE II (PBS) and is the former Executive Editor of TIME  Magazine’s education program.

Mridu Chandra is a producer, writer and director based in New York. Her documentaries explore topics of civil  rights and peace, gender and sexuality, environmental justice, and the law and have premiered at the Sundance,  SXSW, and Hot Docs film festivals; aired on PBS, HBO, Hulu, and Netflix; screened for members of U.S. Congress  and the United Nations; and showcased at museums and film festivals worldwide.

Patrick Wilson is a critically acclaimed actor whose numerous credits have earned him multiple Tony, Emmy and  Golden Globe nominations. Wilson’s illustrious career in theatre, film, and television spans more than two  decades, and has earned him rave reviews in Hollywood blockbusters, independent cinema, on and off Broadway.

His credits include the blockbuster hit Aquaman, 3 films in The Conjuring universe, Insidious 1 & 2, Little Children,  The Commuter, The Founder, Bone Tomahawk, Stretch, The Switch, The A-Team Watchmen, Lakeview Terrace,  Hard Candy and many more. On TV, Wilson has starred in HBO’s Angels in America, Girls, A Gifted Man, and in  FX’s second season of Fargo, garnering multiple award nominations for his career-defining role as Vietnam  veteran Lou Solverson. Wilson has more than 50 film and television credits to his name. His upcoming acting  projects include Moonfall, Aquaman 2, and Insidious 5, where he will also make his directorial debut.

Patrick is co-founder of The Wilson Family Foundation, a nonprofit with the mission of helping children in need,  veterans, first responders, and the promotion of the arts. He also has a decades-long relationship with Broadway  Cares/Equity Fights AIDS, as well as being honored by the New York Senate for his contributions to the gay  community.

Rainbow Youth Alliance SOMA envisions communities where ALL young people, regardless of LGBTQIA+ identity,  have a strong sense of belonging and feel valued, necessary, and hopeful about their future. RYA supports local  LGBTQIA+ youth, their families and allies through education, community building and awareness raising. In 2022,  planned programming for the South Orange Maplewood community includes guest speaker events, discussion  groups, socials, and outings. Please reach out to RainbowYouthSOMA@gmail.com or Instagram (@rainbowyouthalliance) to volunteer, donate or get further information.

PFLAG is the first and largest organization for lesbian, gay, bisexual, transgender, and queer (LGBTQ+) people, their parents and families, and allies. With nearly 400 chapters and 250,000 members and supporters crossing multiple generations of families in major urban centers, small cities, and rural areas across America, PFLAG is  committed to creating a world where diversity is celebrated and all people are respected, valued, and affirmed. To learn more, visit pflag.org, like us on Facebook (/pflag), or follow us on Twitter (@pflag) or Instagram (@pflag). 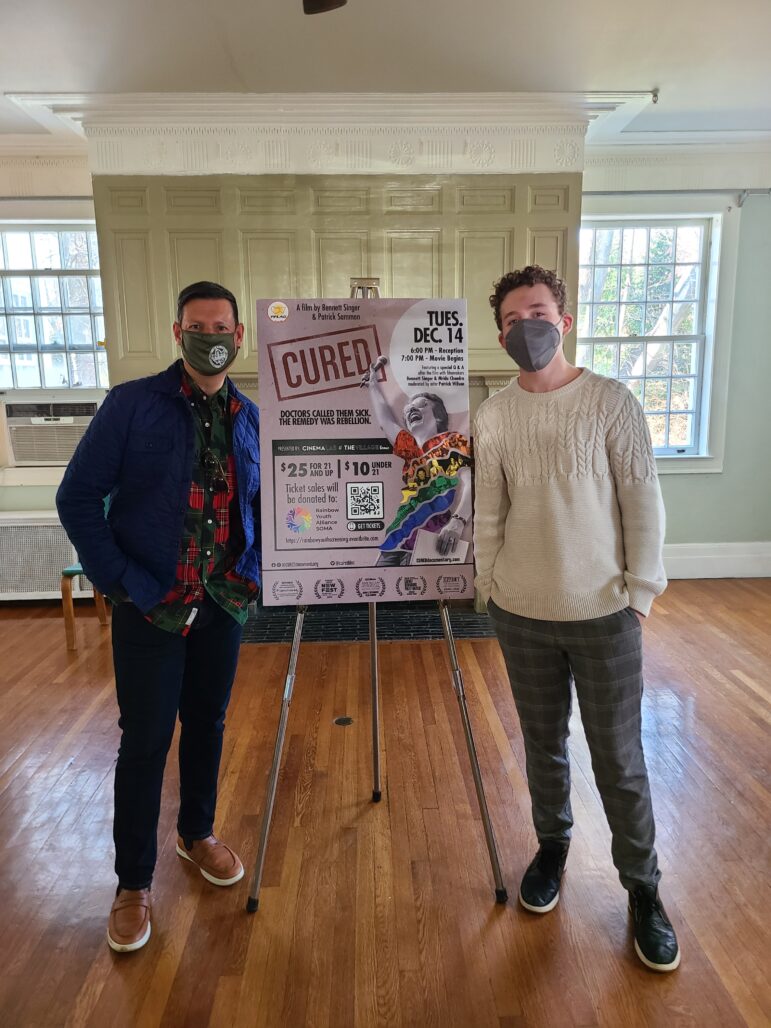 Maplewood Township, where On and Off Broadway sleep, where social justice advances our piloted, where  rainbow crosswalks welcome visitors — one of the most vibrant, attractive, and strong suburban communities in North Jersey. Mayor-elect and conversion therapy survivor Dean Dafis – Maplewood’s first gay mayor, the  county’s only, and one of just a handful of LGBTQ identified elected in the seemingly most diverse states in the  nation – enthusiastically welcomes Rainbow Youth Alliance and applauds high school student and resident, Joseph Geoghan, for  his courageous and impressive leadership: “Our networks are our lifelines. RYA SOMA is especially needed right now, even in LGBTQ friendly communities such as ours, to support our youth who are struggling with self-doubt  and confronted by bullying and bias.”