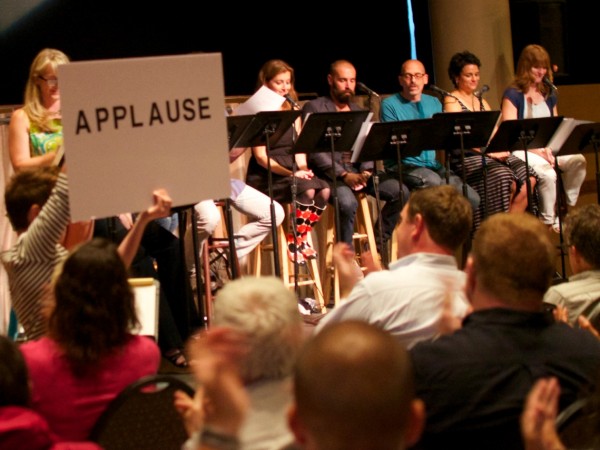 Milkwood will soon be available as podcast episodes. For more information, scroll down.

On Saturday, June 27, the Loft auditorium space atop SOPAC hosted a standing-room-only event that for this reviewer, was the highlight of the inaugural South by South Orange festival.

The happening that drew so many Maplewood South Orange denizens out in the middle of a summer downpour was Milkwood: A Story of Love, Politics, and Demolition, an old-fashioned radio soap opera written and produced by Studio B, a MapSo arts organization known for producing unique and popular events.

Milkwood, a full-length comedy written by Studio B heads Marcy Thompson and Jenny Turner Hall, looks at a “fictitious” New Jersey town going through some growing pains. The plot centers around the demolition of a beloved local landmark, and the colorful cast of characters fighting for – and against – its demise.

“Maplewood and South Orange have been caught up in the drama of the old Police Station, the Gateway, Third and Valley, the Post House, and the Post Office for years, and – essentially – it’s the same story over and over: what kind of towns do we want to live in?” said Marcy Thompson. “And – to a greater extent – who has the power to create change?”

“Development comes into town, and it changes things,” said Jenny Turner Hall. “And it makes for incredibly intense conversations.”

Milkwood brilliantly uses the genre of satire to continue this conversation with the audience, drawing them into a manically colorful microcosm seething with deliciously twisted suburban souls who look—or sound—like your neighbors, fellow PTA members, commute colleagues, and local politicians filtered through the looking glass. And like all successful satires, it is funny—hysterically so, but with the wackiness of the symbolically-named characters and surreal flourishes of plot taking the sting out of this clever sendup of local politics.

“There were a lot of inside jokes, but it would still be funny even if you’re an outsider,” said South Orange resident Jim Robertson, who added: “Father Knows Best meets Blue Velvet—delicious!”

Rich Maloof of Maplewood agrees that Studio B knocked it out of the park: “They did a great job lampooning local politics. I liked that no one was safe: not the mayor, the planner, the librarian or the locals. The writers even satirized themselves.”

Fittingly, the drama opens in a dog park, that world-within-a-world of insanely fraught relationships and power struggles that also serves here as a metaphor for the dog-eat-dog (or, more realistically, dog-mount-dog) arena of love and politics we’ll encounter in Milkwood proper.

Milkwood hurtles in and out of these settings through the interactions of various small-town-staple characters such as the erstwhile gay couple Allen and Paul, the meta-Studio B heads Jenny and Marcy (played by Meg Perischetti and Julie Campbell); and their interactions with Holly, the scheming Mayor Insipio, and the two-faced developer, Anthony Massengill. I say “two-faced” because Studio B left me no choice: in the highest paean to the soap opera yarn, the “douchey” Massengill is initially unrecognizable to his former love, the virtuously gorgeous Holly, because he’s had a face transplant.

Punctuating it all are the gossipy ladies who jog through the town dropping knowledge and passing judgment on the other characters, disappearing and reappearing to clarify the ongoing plot twists like an ambulatory Greek Chorus. Finally, there’s the omniscient, “old-timey” narrator weaving together the episodic stages by inviting us to consider such questions as, “Will Holly and Anthony rekindle the flames of desire…or will Holly’s desires turn back to her Kindle? Tune in for these answers and more on the next installment of… MILKWOOD.”

This “radio play” was actually recorded for podcast and performed by 10 professional actors (plus Thompson and Turner Hall), simply seated on stools and reading the script as the audience howled with laughter.

The cast, a “who’s who” of Maplewood and South Orange theater royalty, featured many Broadway and voice-over artists, including Sandy Rustin, Adam Dannheisser, Charlie Pollock, and David Josefsberg – who recorded Milkwood between matinee and evening performances of his Broadway show, Honeymoon in Vegas.

The live soundtrack of music and effects was provided by the talented local band Monkeyworks, who had agreed on a basic theme but who improvised much of the soundtrack according to the drama unfolding onstage. “Setting the play in the style of an old radio show seemed really smart. It was contemporary and a throwback all at once,” said Rich Maloof. “The actors conveyed such complete scenes just sitting there on stools, and the music from Monkeyworks added so much color and dimension. I’d go back just to listen to the music.”

This innovative drama invites comparisons to Christopher Guest’s classic Waiting for Guffman in its lampooning of suburban drama, but Milkwood is more deliberately self-aware, perhaps in the way that it implicitly begs us all to be. Studio B so bawdily, lovingly, snarkily, and cleverly puts a wish-I-had-time-for-a-manicured finger on our collective anxiety about identity, where the threat of no longer recognizing our town is mirrored by a villain-protagonist who is unrecognizable due to a face transplant, as well as a larger cast of characters who suggest that we all may have been chugging the suburban Kool Aid too long to recognize our no-longer vitally hip selves.

Helena Holgersson is a freelance writer/editor and recovering academic, who currently works as a grant writer for Legal Services NYC and resides in Maplewood, NJ.

For a slideshow of pictures from the June 27 Milkwood performance, click on any image below.