The following is from Frank Rodiño and Manuel Rey: 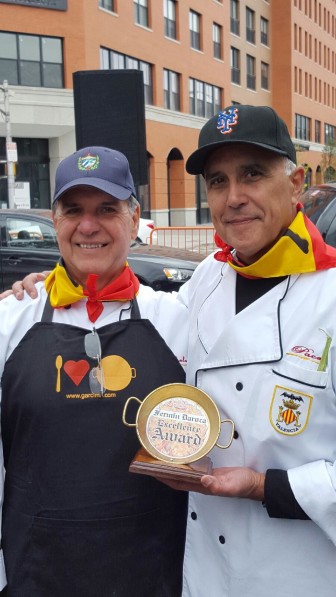 Frank “Paco” Rodiño, of South Orange, and Manny “Manolo” Rey, of Cranford, will be among the 35 teams from around the world competing for the title of the “world’s best paella chef.” Organized by the prestigious “Concurs Internacional de Paella Valenciana”, the 56th annual competition will take place in Sueca, Valencia, on Sunday, September 11, 2016.

The purpose of the competition is to showcase internationally the rich history and high quality standards of traditional paella Valenciana. To qualify for this event, Rodiño and Rey won the 2015 “Paella for the World” competition held in Jersey City last October. That competition pitted them against 10 professional teams from across the Americas including Argentina, Cuba, Ecuador, Peru, and Puerto Rico.

“The competition takes place only 30 miles from my grandparents home town of Pego, in the Spanish province of Alicante”, says Rodiño. “I grew up making paella. My parents, aunts, and uncles passed the traditional methods to me. It’s an honor to return to Valencia to represent the US almost 100 years after my grandparents left Spain for the New World.”

“We both have a passion for paella and good wine”, adds Rey. “We’ve always enjoyed making paella for friends and family. More recently we’ve made large paellas for more than 100 guests at fundraisers for groups like the New Jersey Audubon Society.”

Traditional Paella Valenciana consists of rabbit, chicken, mountain snails, three types of beans, and Bomba rice. Competition rules are very strict. Contestants are provided with all the ingredients to be used as well as the pan and wood used to make the paella over an open fire. The addition of anything not on the ingredient list, including any type of seafood, results in an immediate disqualification. Contestants have 90 minutes from the lighting of the fire until their final entre is delivered to the contest judges. This year, the first prize is $2,500 euros and the title of world’s best paella chef.

“In the US, many people think that Paella Valenciana includes shrimp, clams, and lobster. In Spain, meat and seafood are never mixed into the same paella except at a tourist destination,” explains Rodiño. “It would be like adding canned corn, peas, and carrots to pizza. All may be typical American foods, but they don’t go together. This contest strives to keep those traditions alive.”

“We’ve been practicing hard all summer long, much to the delight of our neighbors. They have willingly served as our taste testers”, explains Rey. “Competing against world-class chefs in the birthplace of paella is a once-in-a-lifetime experience. It should be a blast.”