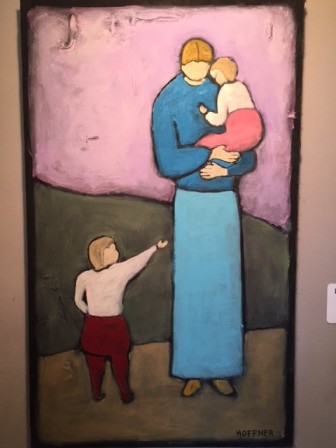 Friday, September 23, Winchester Gardens residents will have a chance to show outsiders some of their hidden talents. Once graphic designers, teachers, and more, these elders’ works of art will be on display during the facility’s “Putting on the Ritz” exhibition this weekend.

Many of the resident artists have credits to their name. Ruth Southwick, the Chair of the Resident Art Exhibition, is an avid oil painter and the creator of the piece pictured on the show’s promotional postcard. In a display of dedication to and interest in their residents, Winchester Gardens has asked Ms. Southwick to paint a photo of the new Healthcare Center there.

Mr. John Less, who is deceased, had a 2013 exhibit at The Jewish Museum in Newark called The Odyssey and Art of John H. Less. Less was a Millburn resident for 50 years. Less’ work often depicted his family’s forced, painful transition from Europe to a new culture here in the United States during WW2. He was born in Berlin, Germany, in 1923, where he studied art in school. As a child, he drew pictures for German newspapers, and when his family came to the US in 1947, he began to work in graphic design for Bamberger Department Stores. After working his way up to Creative Director of the company, Less retired and focused on painting, which he had long loved.

Other notable exhibitors include Joe Dunn, and Lil Sperling. Dunn was named Class Artist of Millburn High School as a 1942 graduate. Also a member of Salmagundi Club in New York City since 1990, Dunn has had work shown at there and in Summit.

Ms. Sperling taught at Columbia High School, and in 1981 won the coveted National Association of Women Artists’ Award. She has shown at the Rivendell Gallery, NJ State Museum, and the Academy of Fine Art in New York City.

Starting Friday, September 23 at 7:30 p.m., the program opens with a fancy cocktail reception and piano music by Clint Edwards. On Saturday, from 2-4 p.m., harpist Jacqui Kerrod will perform as light refreshments are served and friends and family are invited to view the art on display. The show concludes on Sunday, September 25 with a lecture on Asher Brown Durand, Maplewood Artist of the Hudson River School, prior to the exhibition at 1:30 pm in the Auditorium. Artwork will be available to view between 2-4 pm Sunday.

“I am so proud of the talented residents we have here at Winchester Gardens,” said Carolyn Baldanza, Director of Recreation & Leisure. “It has been an honor to interact and work with such world class individuals. They truly are an admirable group.”

For questions about the exhibition, please contact Carolyn Baldanza at 973-378-5146.