Who or What Is Tycoon Dog? And Why Are They Playing Maplewood for Free? 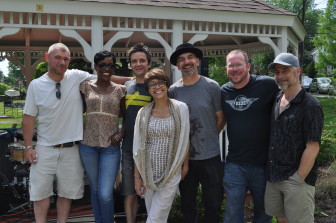 For several years, locals have noticed that the band Tycoon Dog has offered periodic, free concerts in Maplewood Memorial Park.

Tycoon Dog even got some radio play back in the day (see the attached one-sheet) with the songs Hold On and Every Love Song (from the album Ruff Cuts) getting the most airplay. “One or more” Tycoon Dogs songs have also been used in indie films, said Bailey.

“Since about 2007 or so we’ve been doing 15-25 free, outdoor, family-friendly concerts between April and October in parks, amphitheaters, etc – places where folks can gather in a safe, pleasant environment and enjoy music and celebrating together,” said Bailey.

“It’s fun; it gives kids and families a chance to do something enjoyable together for free; it shows folks that anyone can organize and put on a cool event; it reminds folks that music starts off being made by humans even if it ends up coming from your phone; and it is a great way to ‘give back’ some of the joy I have gotten from music over the years. In short, playing or listening to music in a beautiful outdoor place, with lots of happy kids of all ages smiling and enjoying themselves all around you, is just about the most celebratory thing I know of.  So we do it as often as we can.”

Well geez. And it gets better:

“I really, really love the community. I especially enjoy giving a little something back in my hometown…. Aside from my family and friends, doing what Tycoon Dog does is the thing that matters most to me.”

Thanks, Scott and bandmates!

Enjoy this video of Tycoon Dog playing in NYC’s Washington Square Park in 2013:

All shows FREE except * = free with paid zoo admission

Correction to the one-sheet: Radio 98.6 is/was located in Wuppertal, Germany — not Berlin.