From the South Orange Department of Cultural Affairs:

Watershed Literary Events, a spoken-word series sponsored by the Department of Cultural Affairs in South Orange, will kickstart its 2021 season with poets Robert Carlos Garcia and paulA neves on Sunday, February 7, at 2 pm. The event is free and open to the public and will feature a Q &A after the reading. 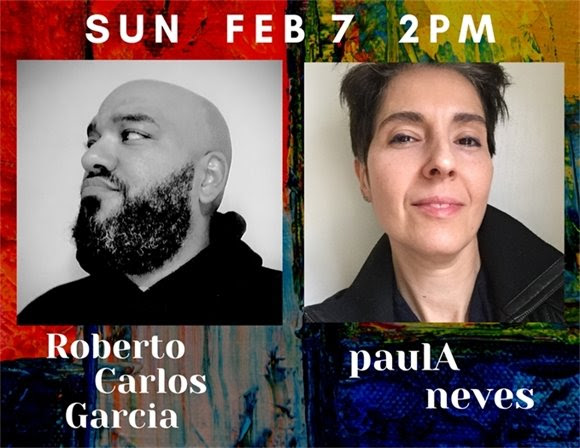 Both poets are members of Brick City Collective, a culturally diverse group of Newark-based writers, artists, and performers committed to social change through literature
and art.

Roberto Carlos Garcia is a self-described “sanchocho [stew]. . . of provisions from the Harlem Renaissance, the Spanish Poets of 1929, the Black Arts Movement, the Nuyorican School, and the Modernists.” He is the author of three poetry collections: [Elegies];black / Maybe: An Afro Lyric; and Melancolía. A Pushcart Prize nominee, Garcia’s work has appeared or is forthcoming in Poetry Magazine, The BreakBeat Poets, Vol 4: LatiNext, Bettering American Poetry, The Root, Rigorous, Academy of American Poets Poem-a-Day, Gawker, Barrelhouse, and many others. He is founder of the cooperative publisher Get Fresh Books and resides in Union County.

paulA neves—yes, her name is all lower case, except for the A—once described her poetic voice as “that of my not-stillborn-after-all twin, the one with that mystery middle name, someone braver, hipper, better looking, and an international-caliber soccer player on the side.” A Luso-American Newark native, multimedia artist, and educator, neves is the author of the poetry chapbook capricornucopia: the dream of the goats. She is an editor at the journal Red Fez and co-founder of Parkway North Productions, which develops documentary and art films. neves is the recipient of numerous honors, including the 2020 NJ Poets Prize from the Journal of NJ Poets and a 2014 CantoMundo fellowship.

The themes explored by both poets range from immigration and gentrification, to love, grief, racism, and history, in both traditional (Garcia’s ode to Allen Iverson’s crossover on Michael Jordan) and experimental forms.

Watershed Literary Events was founded in 2019 with the goal of offering spoken word events in an intimate, natural setting in the Village, but was halted this spring due to the pandemic. “We are thrilled to be able to continue our program by Zoom, with expanded capacity, and be able to feature these two outstanding writer/activists,” says Theresa Burns, a local poet and curator of the series.

Watershed hosts four readings a year, featuring both established and emerging writers with a connection to New Jersey.

This program is made possible in part by funds from the New Jersey State Council on the Arts/Department of State, a Partner Agency of the National Endowment for the Arts.

South Orange-Maplewood Board of Ed to Conduct Evaluation...