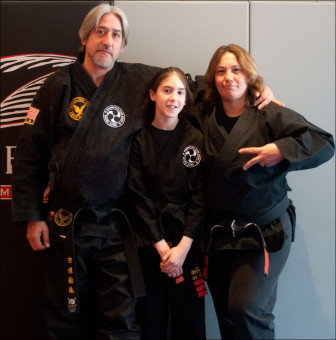 Louis Toledo of Maplewood Karate with his daughter Jessica and sister Diana.

Growing up in Sunset Park, Brooklyn, Louis Toledo “got into a little trouble” with the law at age 15.

To put him back on the right path, a police officer — soon to be Toledo’s instructor — got Toledo involved in karate.

Flash forward to June 2009 when Toledo offered free traditional Japanese karate lessons with the Township of Maplewood at the Civic House in Memorial Park. The lessons were a hit, and when Toledo lost his job as a part of the economic downturn, he decided to make karate instruction his profession.

Maplewood Karate offers Karate Kids classes for children ages four and up. There are also classes for all ages and a popular Family Karate program where parents and children enjoy training together. Those interested can try a class for free.

Maplewood Karate is still accepting registrants for fall 2014 after-school classes (the session started on September 1). Those interested can register over the phone (973-996-8066) or at the studio on 97 Baker Street: