The incident, part of which was captured on a cellphone video by an unidentified bystander, involved Catherine (C.j.) Burgess, a Maplewood resident and Columbia High School alumna, her father Aubrey, and Ryan Pogany, son of Bunny’s owner Leslie Pogany.

According to Burgess, she and her father were confronted by Pogany, who was making deliveries, as the Burgesses were trying to jumpstart Aubrey Burgess’s car that had stalled in a driveway near the restaurant. The elder Burgess, an accountant, owns a business also located on South Orange Avenue.

C.j. Burgess, who is a Navy veteran, reports that Pogany was aggressive and physically threatening to her and her father, demanding they move their cars from the driveway, and that he told her father to “go back to his country” and called her a “N***** bitch” and told her to “leave HIS country.” In a post on the Bunny’s Facebook page, owner Leslie Pogany denied the allegations, writing, in part: “The terrible things that some people are saying and spreading are false.”

The SOMA Against Hate Collective also cites a letter sent to a community member by Pogany family attorney Elaine Harris “full of veiled threats and using dog whistles like ‘insolent’ to describe C.J., an African American adult woman, as if she owed a duty of deference to Ryan Pogany, son of Bunny’s owner, Leslie Pogany.” The collective writes that “Harris impugned the character of a Navy veteran and accused C.J. of lying.” (See Harris’s letter, which has been widely circulated on social media, below.)

Meanwhile, the SOMA Against Hate Collective sent a letter to the South Orange Village Center Alliance asking for a community boycott until Bunny’s issues an apology, “acknowledges efforts to bully” Burgess and her father, removes Ryan Pogany from “a public-facing role in the business,” and has management and staff take anti-bias training. (See the full statement below.)

The SOMA Against Hate Collective also called on The South Orange Village Center Alliance to remove Leslie Pogany from its Board of Trustees.

In addition, SOMA Justice has reached out to SOMA Baseball and the South Orange Recreation Department asking them to sever ties with Bunny’s, which is a sponsor of the youth sports league.

Village Green reached out to SOMA Baseball, the South Orange Recreation Department and SOVCA to ask for response and will update this story when a response is received.

Village Green also reached out to Maplewood Township Committee Recreation liaison Greg Lembrich asking if he had a response.

“Like many in the community, I was appalled by Mr. Pogany’s behavior and disappointed in the manner that Bunny’s addressed the incident,” said Lembrich.

Correction: This story originally reported that the SOMA Against Hate Collective sent letters to both SOVCA and SOMA Baseball. The collective sent a letter to SOVCA. SOMA Justice reached out toeSOMA Baseball and the South Orange Recreation Department. 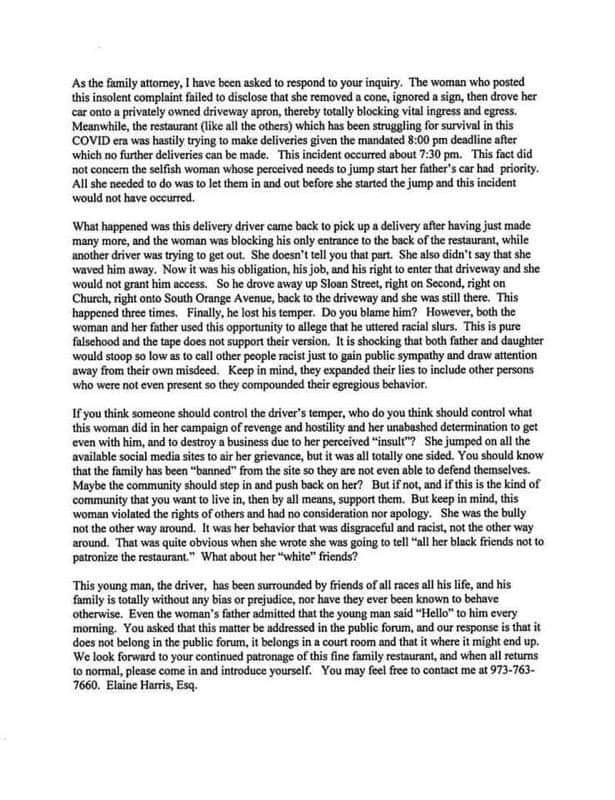