Highland Place, the popular steakhouse, bar and live music spot in Maplewood Village, is temporarily closed for “restructuring and retooling” and will reopen some time next week.

“We are re-engineering the menu, and looking at the whole structure of the business,” said owner Chris Farrow in a phone interview on Thursday. Farrow disputed rumors — heard around town and posted on a local message board — that the restaurant was shutting its doors for good. 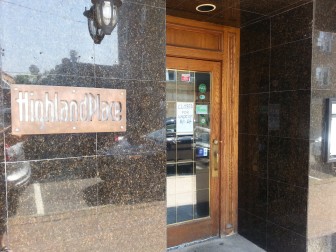 A handwritten sign on the restaurant’s door reads “Closed for vacation 8/1-8/4.”

Farrow said he decided to take advantage of the summer lull in business to make some changes, and the restaurant will reopen early next week.

He said there will be some “new management and procedures” in place; the kitchen team will remain the same for now.

When asked if any renovations were taking place, Farrow said “nothing major. I don’t want people expecting a makeover.”

Farrow said this time of year was slow for the restaurant, as it is for many local businesses. Also, when there is no live music scheduled, the spot sees a dip in business. “If there’s no music, it’s out of sight, out of mind,” he said.

Meanwhile, live music will resume at Highland Place next week, with the Glenn Franke Big Band scheduled for Monday (“they’ve really started to take off,” said Farrow), jazz drummer Greg Buford on Tuesday (“always packed”) and local bands playing on Thursday and through the weekend.