The Maplewood Deli & Grille is under new ownership — and while customers’ favorite items will remain on the menu, look for some exciting additions to the menu, hours of operation and space in the next months. 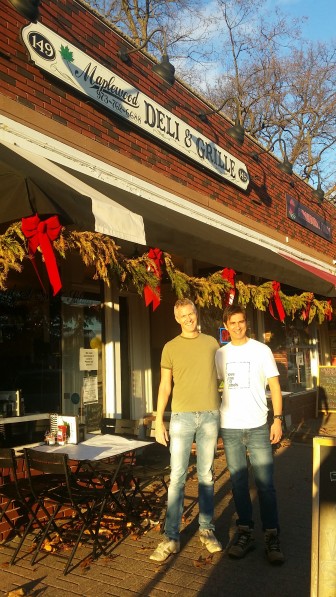 “We are both entrepreneurs,” said SOMA resident Christopher Burtt, who with his husband, Andres Ulloa, took over ownership of the deli earlier this month.  “We liked the food and the vibe, and when we learned the owner was interested in selling we began talking about taking it over ourselves.”

Previous owner Eric Gurny purchased the restaurant in 2013 from Sean Flood, who had run it for four years. Ulloa, who grew up in Colombia and lived in Spain for nearly two decades, worked as a line cook under Gurny.

An active member of the Unitarian Church in Summit and board member of North Jersey Pride, Burtt met Ulloa a year ago at an LGBT fundraiser; the couple married in July. Ulloa’s sister, Marcella, was manager of the deli and will continue in that role. She previously managed a Colombian restaurant in Florida.

“We always thought the food was great, but that we could improve the service, extend the hours and do more marketing to let people know about it,” Burtt said. “We love that it is right in the heart of Maplewood and part of the community.”

The trio plans to keep all of the well-liked menu items — especially the Rachel (a spin on a classic Reuben made with turkey, apple coleslaw and Russian dressing); the Santa Fe Chicken Salad and the Jamaican pulled pork sandwich.

Burtt and Ulloa eventually will add dinner and breakfast, and ramp up the catering business. For dinner, they envision adding Colombian and Mediterranean items (think paella), in a nod to the Ulloas’ heritage.

They also will bring back the popular “Artist of the Month” program spotlighting a different local artist’s work on the walls each month, something that was started by Flood.

They are currently hiring new staff. Look for an official grand opening in the new year.