A new bakery is coming to Maplewood Village: Palmer’s Sweetery & Cafe, located in the former Little One & Co. clothing store at 1 Highland Place, will open its doors in February. 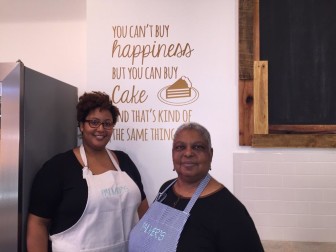 Kia Palmer-Sherwood and her mother, Joan Palmer, are co-owners. Palmer-Sherwood, a Culinary Institute of America-trained pastry chef who formerly worked at Ninety Acres among other places, is the baker.

During a recent interview, as construction workers buzzed around putting last-minute touches on the warm, inviting space, mother and daughter talked about what drove them to open the bakery.

“I’ve been in the [restaurant] industry for a while, and I wanted a space to call my own,” said Palmer-Sherwood, “where I could call the shots.”

Joan Palmer — who ignited her daughter’s love of baking at a young age with favorites such as pineapple upside down cake and sock-it-to-me cake (a Southern cake with pecans and cinnamon) — said wryly, “I’m living vicariously through my daughter.” Palmer even relocated from Georgia in order to help her daughter fulfill her dream of opening her own place.

The Palmers know Maplewood well, having previously lived there for many years. Currently, they live in Springfield.

The bakery is filled with warm wood accents and has a counter facing the large window, perfect for people-watching, and a sparkling new kitchen. 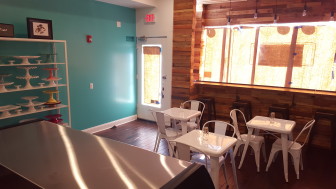 When Palmer-Sherwood saw the space, she knew it was right — especially the location. “We love Maplewood Village,” she said, citing the diversity and plethora of young families. “We want to form relationships with our customers. We’re very excited to immerse ourselves into the town.”

They are in the process of tweaking the menu, but it will reflect Palmer-Sherwood’s classic French training as well as her love of old-fashioned American baking. Imagine a diverse roster of sweets with “global flavors,” with items such as pink peppercorn cupcakes, fancy French financiers, cheesecakes, Bundt cakes, and fried pastries including doughnuts, churros and bomboloni (Italian filled doughnuts).

“I like to transform basic ingredients into something awesome,” said the chef. There will also be breakfast treats like yogurt parfaits with housemade granola, and a small selection of savory items such as quiches. Beverages will include coffee, cocoa and lemonade in warmer months. 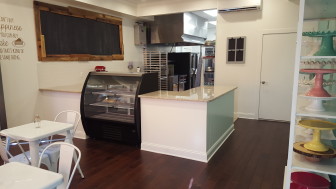 Palmer’s Sweetery & Cafe will be open from early morning until 7 p.m., to give commuters the option to pick up a dessert on their way home from work. In addition to the counter seating there are a handful of tables for people who wish to linger over their desserts — but leave the laptops at home, as there will be no WiFi. “We want to give people a chance to connect to one another and have conversations,” said Palmer-Sherwood.

Asked if she was concerned about competition from The Able Baker down the street, Palmer-Sherwood said no. “This town has three pizza places and two Mexican restaurants; it can support more than one bakery.”

The two plan a soft opening at first and a grand opening later on. Meanwhile, start dreaming of doughnuts!