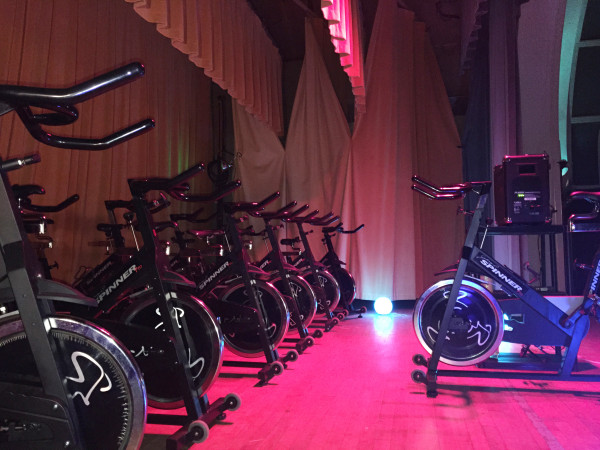 CycleMaplewood on stage at The Woodland

CycleMaplewood — a new indoor cycling program in Maplewood — was recently created by local entrepreneur Alli Joseph in partnership with Maplewood Township to keep locals in shape at affordable prices.

Classes are being offered seven days a week on stage at The Woodland — the former home of the Woman’s Club — at 60 Woodland Road in Maplewood Village. Find the schedule here.

“When I heard less than a month ago that Cycle in Motion on Valley Street was going to close … I was frustrated,” wrote Alli Joseph, CycleMaplewood Founder/Director in an email, “as there is no other indoor cycling studio that’s affordable for the community in the area.”

Joseph put on her “business/entrepreneur hat” and approached Keith Knudsen, the Director of Recreation and Cultural Affairs for the Township of Maplewood.

The result was CycleMaplewood, which began offering classes at The Woodland in November. The Township provides the space, Carl Wolf, owner of the now closed Cycle in Motion generously donated 17 Spinner Pro bikes, and Joseph supplies the manpower plus such amenities such as antibacterial wipes and cleaning supplies, storage cubbies for client belongings, lighting, etc. Joseph said that the primary bathrooms at The Woodland have been upgraded and are “clean and serviceable” — though without showers.

Joseph also notes that CycleMaplewood has both male and female teachers, ranging from “energetic, engaging women” like Tara Cantagallo, Dawn Lorentz, Lourdes Moncada — and Joseph herself — to Anthony Conyers, who is one of the “original spinning instructors, trained by Johnny G, originator of the exercise form.”  Alternate subs include Jessa Barnes and Tom Lahoud.

Response has been strong so far, especially on weekday mornings. “We are attracting a lot of probable work-at-home folks, some of whom are also moms and dads. By making our class times in the evenings a bit later (they will all be 7 p.m. going forward, bumped up from 6:30 p.m.), we hope to make riding after work a more available possibility for commuters.”

In creating her evening schedule, Joseph studied the NJ Transit train schedule and queried clients and friends who commute on the most crowded train times.

“I have a class times survey on the site, which I have encouraged anyone who wants to ride with us to complete.” Most votes are for 5:30/5:45 a.m., 9-11 a.m. weekdays and weekends, and 6-8 p.m. weeknights. “We are doing our best to accommodate the ridership with the resources we have.”

Joseph thinks that this unique program could serve as a model for other municipalities in New Jersey that want to help fight obesity and sedentary behavior — during the winter months especially — as well as promote health in their towns.

“The building is a beautiful landmark with lots of history. The Town is working hard to update it progressively, and we appreciate the cooperation of our students as the building is transformed. Overall, I am happy to have found a home and a receptive audience for the program — and a fine partner in the Township of Maplewood, which saw the promise of an indoor cycling offering, especially during the winter.”

Click on any photo below to enjoy a gallery of images from CycleMaplewood.