Maplewood Memorial Day Parade Steps Off 9 AM Monday, May 30

The Village Green May 26, 2016
0 FacebookTwitterPinterestEmail 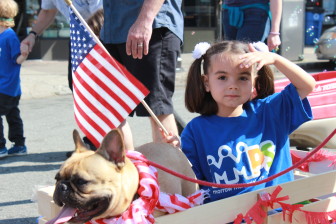 The Annual Maplewood Memorial Day Parade will take place this year on Monday, May 30.

The parade kicks off at 9 a.m. from the Columbia High School parking lot across from Gleason’s Cleaners on West Parker Avenue. (Marchers should assemble by 8:30 a.m.)  The route goes north on West Parker, then left onto Maplewood Avenue through town, left on Baker Street past Maplewood Middle School and then left on Valley, ending at Town Hall. The parade lasts approximately 40 minutes.

A ceremony honoring veterans who have died in service will immediately follow the parade on the steps of Maplewood Town Hall on Valley Street. The ceremony concludes with a roll call of Veterans of Foreign War members who died in the past year and the placing of the wreath.

The Annual Maplewood Rubber Duck Race takes place at the Oakview Bridge in Memorial Park after the ceremony at Town Hall concludes.

South Orange will host its Memorial Day remembrance on Monday, May 30 from 10:15 – 11:15 a.m., by the Rock at the Duck Pond off Mead Street. The ceremony is organized by the Village of South Orange Government, Boy Scout Troops and Service Veterans.