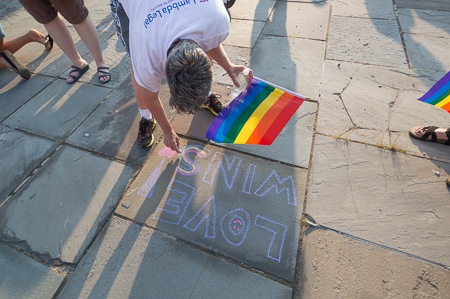 Now, noted Maplewood Mayor Vic DeLuca, the right to marry is not dependent upon zip code but can be realized nationwide.

At a rally attended by hundreds on the steps and lawn in front of Maplewood Town Hall, DeLuca noted the lyrics of the national anthem — “land of the free.” Now, said DeLuca, that includes “the freedom to marry.”

Many gathered tonight were from Maplewood and South Orange, but the event attracted attendees from across New Jersey. Louise Walpin and Marsha Shapiro traveled from South Brunswick to celebrate, posing with N.J. State Senator Ray Lesniak who had officiated — and paid for — their wedding.

Steve Mershon of Rainbow Families of Maplewood and South Orange introduced C.J. Prince of North Jersey Pride by accidentally calling her “C.J. Pride” before correcting himself. Prince joked that, after today, she may indeed change her name to Pride.

But Prince quickly grew serious, reading the names of the nine individuals gunned down in a Charleston, S.C. church last week. “Our movement is about more than marriage, about more than LGBTQ equality. It is the struggle for equality and justice for all people in our nation. The attack on any one person in our collective struggle … is an attack on each of us here today.”

Click on thumbnail below to see a slideshow of images from the rally. Thanks to Joy Yagid for several of the more beautiful photos.