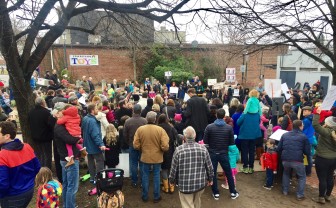 The big news on Saturday was of course the enormous crowds that showed up in force to various protest marches across the country and the world, with numbers that far exceeded original estimates.

Closer to home, the crowd that gathered for a student-led, grassroots unity march in downtown South Orange might have been smaller than those in Washington DC or New York City — but they were no less passionate or enthusiastic.

“This is a movement against hatred and it needed to start at a local level,” said South Orange Middle School 7th grader Hudson Pollock, the organizer. “I knew that something needed to happen here, and no other event was being held to bring the community together.  Originally I thought it would be about 20 of my friends, but it sparked into something much bigger.”

Marchers gathered at Sloan Street and then walked on South Orange Avenue, through the heart of downtown, ending at Spiotta Park, where Pollock and others spoke. 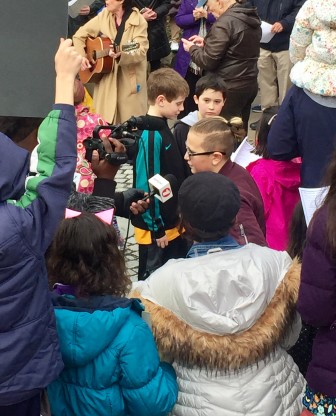 “Earlier this week Hudson said that he wanted to have a March in South Orange for his friends, who couldn’t attend the national events,” said the student’s mother, Vanessa Pollock. “He made a flier, handed it out 50 to students at South Orange Middle School and had no idea that it would blossom into such a large community event. His passion for love and equality really shone today and I am proud that he put his beliefs into action.”
Photos courtesy of Vanessa Pollock.
anti-Trump protest in South OrangeHudson PollockMaplewood South Orange Protest MarchMillion Women MarchProtest MarchSouth Orange Middle SchoolSouth Orange Unity March
0 comment
0
FacebookTwitterPinterestEmail