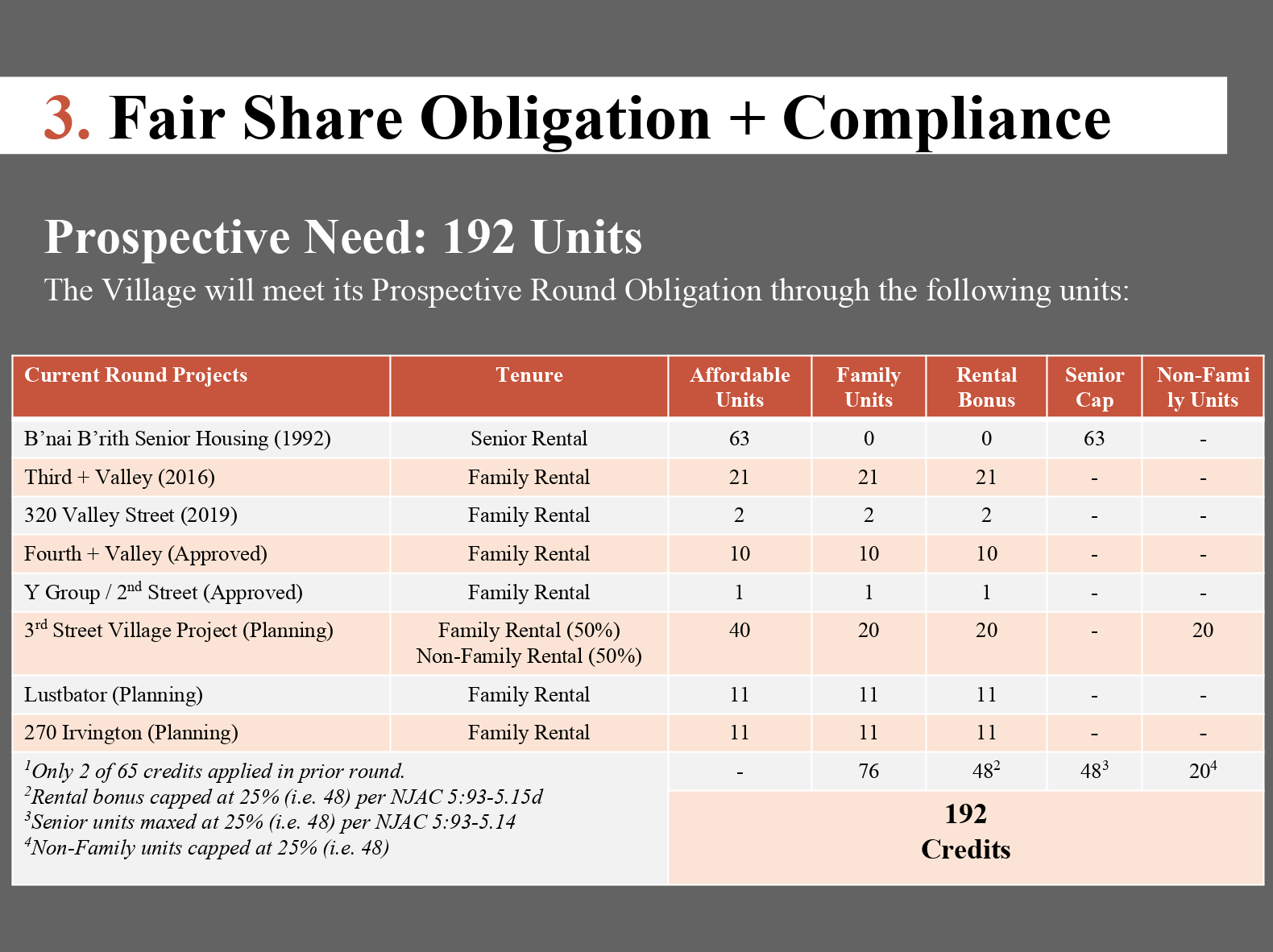 A multi-year process to settle a suit brought by the Fair Share Housing Center moved forward on January 6, when the South Orange Planning Board ruled that the settlement was consistent with the Township’s Master Plan.

Golda Speyer of Topology presented the details of the settlement: in short, South Orange will apply a combination of existing affordable housing units as well as units in the development pipeline to meet its new fair housing obligation of 192 units by 2025 (the previous obligation was 63 units).

One member of the public asked if commercial businesses being uprooted could be assured of affordable rents. Planning Board Chair Harold Colton-Max responded that her question was a “good” one. He noted said that the Township was proposing meeting its affordable housing obligation through 9 projects, 6 of which were already built with 3 in process. Colton-Max said that the scope of those three projects and any prospective rents were yet to be discussed, approved or implemented, and that they would come before the Planning Board individually at later dates.

Read more about the history of South Orange and Maplewood and their affordable housing obligations here.

“Over the past two years, I have worked to redo our entire affordable housing compliance agreement undoing years of unrealistic zoning that would have never actually constructed affordable units. What has occurred in South Orange is a disgrace and has contributed to the segregation that exists throughout New Jersey. I have introduced ordinances that will require 1 in every 5 units developed to be for moderate and lower-income families. I also quadrupled payments for developers to construct units ‘off-site’ with a required 10% on-site in any new development. I am also proud to share that South Orange has not used a Vacant Land Adjustment in negotiating its fair share obligation. We were given a number and accepted it. I have laid out a path for this governing body and future governing bodies to actually hit numbers. This is an area during my term I am most proud of. Affordable housing advocates throughout the state frequently request my presence on panels and speaking engagement to take about our collective responsibilities as towns – particularly affluent towns – to make New Jersey more equitable. Housing is where it all starts. It will dictate access to transportation, quality government services, job opportunities, education, etc. Housing segregation and exclusionary zoning has created an absolute mess in this state and I will continue doing my role at the local, county, state and national levels as an advocate for affordable housing.”

In addition, the slate of Bob Zuckerman, Donna Coallier and Summer Jones (all of whom were elected to the Board of Trustees) wrote:

“A major impediment to affordable housing is getting residents to agree on how to support redevelopment with inclusionary housing. We fully support the Master Plan process as one way to gain that needed consensus. As we understand it, South Orange is one of only a few towns that have accepted and embraced the number of affordable housing units stipulated by the Fair Share Housing Committee. We support the approach that has been spelled out to get a minimum of 100 units built by 2025 for moderate and low-income households.”

The settlement (see downloadable presentation below) will now return to the South Orange Board of Trustees for a hearing and vote on January 27.

Watch the presentation and discussion at the Jan. 6, 2020 South Orange Planning Board meeting here.